It’s unclear if anyone outside of Sundance will ever see it, but James Franco debuted his “Three’s Company: The Drama” last night at the New Frontiers exhibition playing at the former Miners Hospital on Park Avenue in Park City.

This isn’t a film, but more of a video. Franco and friends got the rights to remake the first three episodes of the Seventies sitcom. Franco takes the Jack-John Ritter part. A female friend plays Janet, and a male friend with a dark beard and mustache not quite covered by a blond wig is Chrissie-Suzanne Somers.

Neighbor Larry is played by Franco’s pal Vince Jolivet with a wig. The real Larry–actor Richard Kline–was flown in and shown episode 1 in the art installation. He and his wife were a little taken aback at a few of the modern dialogue changes.

But most of the dialogue was right from the original show. It’s just spoken seriously, without a laugh track. “Suddenly you see how desperate the characters were,” Kline said later. The original Larry, of course, never let his genitalia become exposed, even if briefly.

The videos were projected on all four white walls of a room that was barely 12 feet square. Viewers were invited to sit on the floor. Once the campy shlock value of the whole thing subsided, “Three’s Company-The Drama” actually settled down into something weirdly interesting. It was not a goof or even an homage. It was actually the freshest thing I’d seen all day after four features in a row of varying effect. 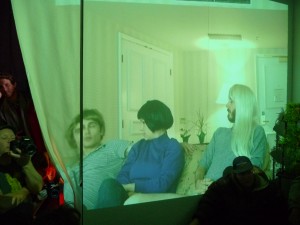