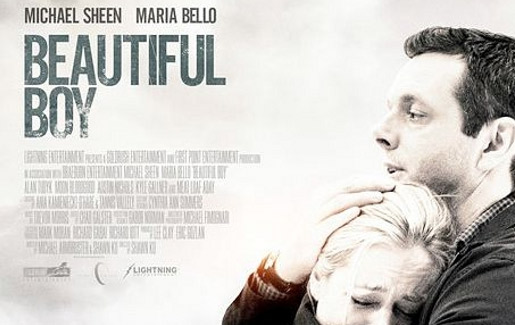 “Beautiful Boy” debuted at the Toronto Film Festival last September. The drama, directed by Shawn Ku, stars Maria Bello and Michael Sheen as parents of an 18 year old boy who kills 21 people on his college campus. Kyle Gallner plays the couple’s son, seen in flashbacks and in TV News scenes from the college campus.

The only difference is, in the movie, the boy then takes his own life.

Anchor Bay, the small film division of Starz Entertainment, picked up this very sad but insightful film at the Toronto International Film Festival for US distribution.

What’s interesting about “Beautiful Boy” is that it tries to get into the minds and lives of the parents, upscale, smart people who knew they had a troubled son but could never get hold of the situation. Their lives fall apart quickly as they’re forced by prying media to move out of their house. No one wants the husband to return to work. And the marriage, which was always shaky, is in peril.

Reading about the Loughrans this morning, and then seeing reporters trying, idiotically, to get comments from and their neighbors, is eerily so much like “Beautiful Boy.” The movie may be too sensitive now to release any time soon, though. It’s worth seeing for the terrific performances, but it’s also a film with no happy ending. It is what it is.