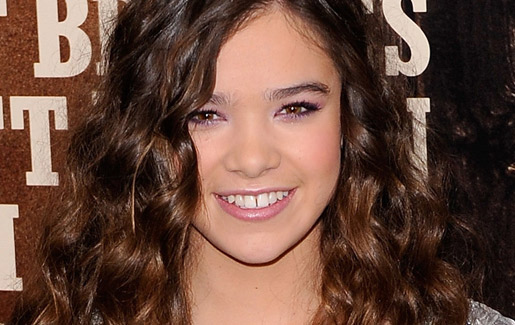 Indeed, when the pair presents an award together on Sunday night at the Golden Globes, that knocking you hear will be Hailee’s knees.

Yes, Justin Bieber, annoying teen pop star who has absolutely nothing whatsoever to do with movies, or TV, will be a novelty presenter on the Golden Globes. This is how the Globes keep up their reputation: serious movie stars like Justin Bieber.

Hailee will be thrilled, though, along with all the other 14 year olds who watch the Golden Globes.

Meanwhile, we caught up with Hailee at yesterday’s swellish luncheon at the Four Seasons, just above the fabled pool room, for “The Social Network.” Director David Fincher made it in from Switzerland, where he’s remaking “The Girl with the Dragon Tattoo.” As usual, screenwriter Aaron Sorkin spoke for the group which also included Jesse Eisenberg, Andrew Garfield, and Armie Hammer. (I’ve never seen Fincher speak; if he wins awards will Sorkin step in?)

Hammer, great-grandson of fabled billlionaire Armand Hammer, did admit that he keeps a box of open baking soda in his fridge.

“Not because I get a royalty from every box, but because it works,” he said. Armie is quite jovial for a six foot five matinee idol. But he just wanted to meet actor Matthew Modine to tell him a family story. “My mom always used to complain about the way my hair looked,” Armie told Modine. “She’d say, Why can’t it look like more like Matthew Modine’s hair?”

She might not have liked Modine’s wind tousled hair yesterday, though. He rode his bike all the way from the West 20s to the East 50s for the lunch.

With so many young people–Eisenberg, Garfield, Steinfeld, Hammer–around, some of the older actors’ fame had to be explained to the new stars. Steinfeld and Garfield, for example, knew the famed TV, movie and Broadway star Michele Lee from “Herbie the Love Bug.” They weren’t yet born when she commanded 14 seasons of “Knots Landing.”

Kevin Spacey roamed about, and producer Scott Rudin accepted compliments on his new trim look. Looking hot: Amy Pascal, head of Sony/Columbia Pictures, who just renewed her contract. She looks great, and $200 million in the till from “The Social Network” doesn’t hoit, they say!