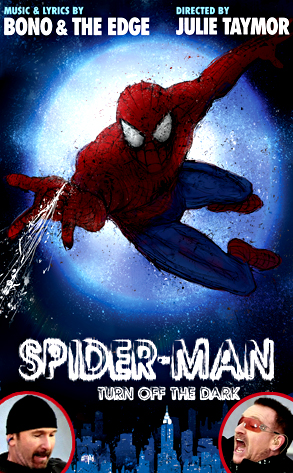 “Spider Man: Turn off the Dark” may be the most controversial Broadway show ever. But it’s also a hit.

The Julie Taymor-Bono & the Edge musical played at 100 % capacity from December 20th to the 26th according to Playbill magazine’s total of Broadway grosses.

Only two other shows played at 100% over the holiday week: “Wicked” and Al Pacino in “The Merchant of Venice.”

“Spider Man” took in just over $944,000. That’s with missed and stopped shows, cast replacements, injured players, and a barrage of attacks led by the New York Post to shut it down.

Are people coming to see if there’s an accident or a disaster? Maybe. but I think not. And word of mouth must better than the Post or other naysayers insist.

The $65 million show will open on February 7th, then spin off productions in places like Las Vegas and London.

And closing news: “Women on the Verge of a Nervous Breakdown,” a truly terrible show, is shutting down on January 2–three weeks early. Good bye and good riddance.