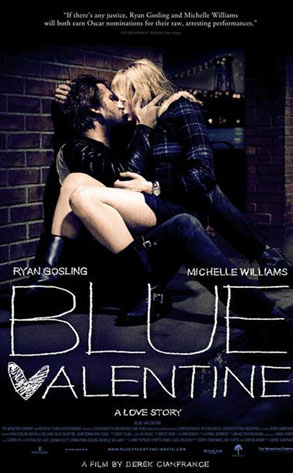 There are some other end of the year films opening today–Mike Leigh‘s “Another Year” is very British and meandering. Javier Bardem is great in “Biuitiful” but it’s the most depressing film of the year. And distressing.

I said last January at Sundance that “Blue Valentine” was an Oscar nominee, and that both Gosling and Williams would make the final five in their lead acting categories. I’m thrilled that so many reviewers and bloggers “got” it. Cianfrance’s film is one of the top 10 of 2010, and deserves to be in the mix for Best Picture. I think when Academy voters sit with it, it’s going to blow them away.

There are so many great moments in “Blue Valentine.” If nothing else, see it for the scene on the Manhattan Bridge. It was all improvised, and Gosling nearly went over the side. There were no stunt people or nets.

“Blue Valentine” has had a tough birth. First it was wrongly assigned an NC-17 rating, which was appealed and overturned to a proper R. Now it’s ineligible for the Writers Guild Awards. Are they kidding? The WGA has also excluded “The King’s Speech” and “Toy Story 3.” So the WGA Awards are suddenly meaningless. Talk about doing yourself in. Who can take them seriously? All of those screenplays, as well others like “Winter’s Bone,” are the best of 2010. “Toy Story 3” has a brilliant original story. “The King’s Speech” is full of gorgeous language and inventive moments. Is the WGA only interested in adapted screenplays?

As for “Blue Valentine”: Gosling and Williams are two examples of young actors who’ve come a long way in a short time. They along with James Franco, Anne Hathaway, Sam Rockwell, and a handful of others are the next generation of Hollywood star actors, not just star celebrities. Williams, by the way, is said to be phenomenal in next year’s “Marilyn and Me,” in which she plays Marilyn Monroe. I thought she would have made the perfect Daisy Buchanan in the new “Great Gatsby.” She could still play Myrtle, if Baz Luhrmann is set on Carey Mulligan.