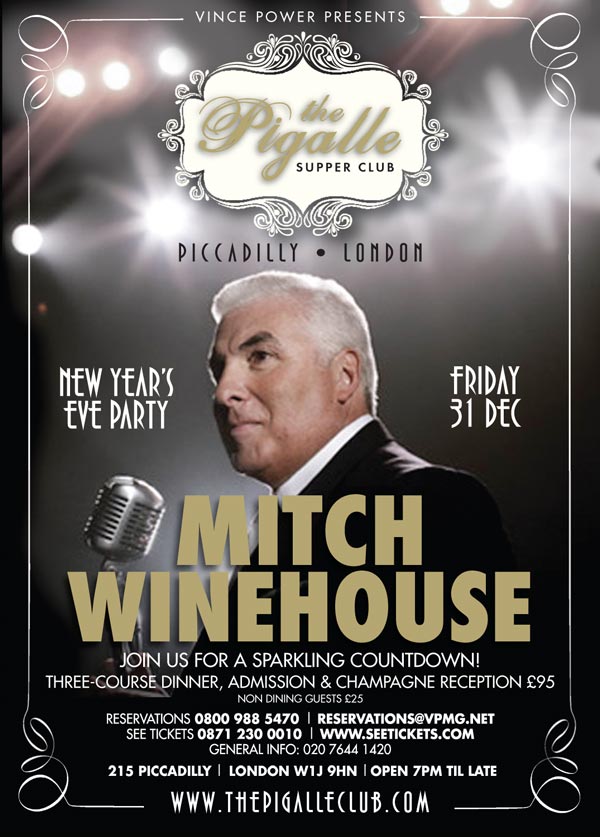 Mitch Winehouse, father of disaster in progress Amy Winehouse, is set to perform his own New Year’s Eve concert in London.

Since Amy can’t-doesn’t-record or perform, someone’s got to do it.

Mitch apparently has released an album called “Rush of Love.” He’s going to sing the songs from it at Le Pigalle in Picadilly on December 31st. The show, including dinner and Champagne, is a reasonable 95 British pounds, or about $150.

Does Mitch know he’s cashing in on daughter Amy’s so called success? He does. Here are excerpts from his press announcement:

“No one is more aware than Mitch Winehouse of the accusation soon to be leveled at him.

“Well of course I wouldn’t be in this position without Amy,” he laughs indulgently, as if anyone could think differently or even see that fact as a negative, “but now the opportunity is there, why not take it? Who wouldn’t want to make an album?”

For Mitch Winehouse to cut a record called Rush of Love at the age of 60 is an unlikely twist of fate, especially one with a song selection revealing a real depth of knowledge and impeccable taste.

But It comes from a perfectly natural place and reveals the roots of his own, as well as his daughter’s musical inspiration.  This is no album of the usual Rat Pack standards – it is jazz, swing, crooning, if you like, but not pop.
Mitch has been a businessman, salesman and latterly a London cabbie. Until his daughter began persuading him to record 6 years ago, ‘singer’ was not a career move.

But while the kids listen to his daughter, Winehouse senior is taking them further back to the roots.

“Everyone likes this music, young and old,” he says, “but there is so much more that no one’s ever heard. I was looking up lyrics on the internet and came across Sinatra performances. The comments from young people underneath are all saying things like ‘this is the most beautiful song I’ve ever heard, I didn’t know Sinatra could sing like this’. They only hear My Way these days.”

“Suddenly, I just want to perform,” he concludes, a little surprised at himself, “I want the chance.”

PS Remember Amy? What a career! Her second album, the Grammy winning “Back to Black,” was released on October 30, 2006. Since then it’s been lots of real “Rehab,” tattoos, arrests, scandals, and bad hair days. A follow up album? Well, this is it.