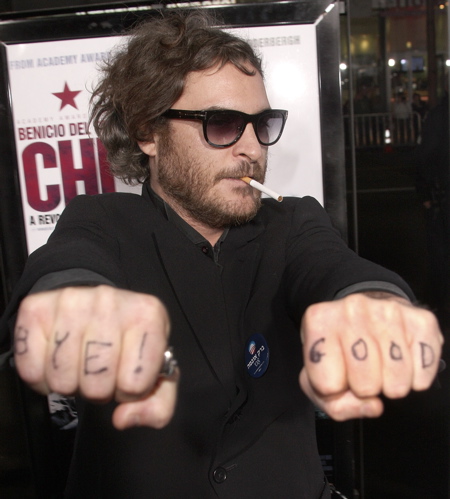 So what was the weirdest movie of 2010? I’m not saying worst–there were many far worse for many reasons–but Casey Affleck and Joaquin Phoenix‘s “I’m Still Here” was the weirdest, most unnecessary project imaginable. It was a hoax that didn’t quite work.

The two actors, very talented, are also brothers-in- law. Affleck is married to Joaquin’s sister, Summer. Affleck is a little more industrious in his career; Joaquin, with two Oscar nominations behind him, seems to be drifting.

The result is this pseudo-mockumentary meta kind of thing for which Phoenix bloated himself with milk shakes, grew a Hasidic beard (he resembles my old from the Lower East Side tenement landlord), and developed a permanently stoned look (not hard).  The real over the top detail: sunglasses that are Scotch taped together.

Phoenix announced in 2008 he was retiring from acting to become a rapper. Affleck follows him around as he makes a planned, fake appearance with Dave Letterman, and hounds P Diddy to become his rap record producer. Diddy is such a bad actor that he gives away the whole thing when they at last meet. He telegraphs it more than Western Union. By the time Joaquin gives his first rap performance, the audience is way in on the joke.

When Phoenix isn’t ranting, he has to come in to contact with other people. Those people aren’t so good at keeping the secret themselves. Is this “Borat”? Is is a satire of reality TV? Is it a tribute to Andy Kaufman? Does anyone care? Not much.

One thing that “Joaquin Phoenix” the character seems to be in is pain. If you could make it through this nearly two hour session of boredom, you’d see him visit his father, John Bottom , at what looks like the famous Florida cult in which Bottom and his wife, the former Arlyn Sharon Dunetz, now aka Heart Phoenix, raised their kids. It’s where “Joaquin Phoenix” goes to drown himself. Is he re-embracing the cult? Or indicting it? Who knows?

The boys spent money dough on this, and it does show that Casey is a pretty good director. Making an actual movie might have been better use of all resources, but hey–they’re young, they’re rich, and haven’t got much else to do, apparently. The real Phoenix will rise again, unless he wants to be Marlon Brando for this generation, stay fit, and live an island, occasionally saying weird things in public. It’s definitely more tantalizing than playing the Hollywood game, which I think Joaquin doesn’t care about anymore.

But there are other, more productive ways to show that than just goofing off. Look what Paul Newman did for charity, or Robert Redford, or even lovable Betty White with pets.

PS Kind of more interesting is that Phoenix, who is 36, has had a minder or male nanny for most of his life named Larry McHale. He’s in the movie. And Antony Langdon, brother of Liv Tyler’s ex husband, Royston, the brothers from a failed Brit rock group called Space Hog, follows Joaquin around and occasionally exposes himself. They’re the “Entourage” part of the story, except without the wit or irony.