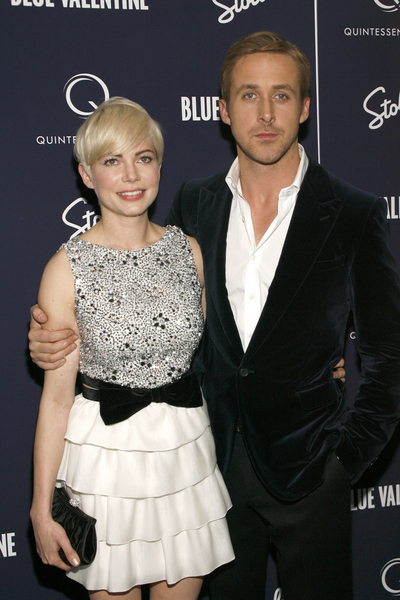 Harvey Weinstein prepared to fly to Los Angeles today to appeal the NC-17 rating for “Blue Valentine.” He’s bringing his lawyers and a lot of charm. Really, the idea of an NC-17 for Derek Cianfrance‘s searing, serious drama is utterly ridiculous. There’s racier stuff on “The Young and the Restless.”

But I digress: last night, “Blue Valentine”–a Sundance crowd pleaser–got its official premiere at the Museum of Modern Art, followed by one of the great parties of the fall season–thrown by Oscar guru Peggy Siegal–at the “Boom Boom Room” atop the Standard Hotel (the whole thing sponsored by Stoli Vodka and Quintessentially).

Stars Ryan Gosling and Michelle Williams were both there, the first time they’ve been together, I think, since Sundance. Their eclectic audience included everyone from  Lance Bass (not together) to Lord and Lady Astor, Parker Posey, Jonathan Ames (he writes the “Bored to Death” series on HBO), “Half Nelson” co director Ryan Fleck, the movie’s producer Jamie Patricof, and “Gossip Girl” star Blake Lively, who is dating Gosling.

Both Ryan and Michelle are consistently mentioned for Best Actor and Actress nominations. Academy members should be studying their “Blue Valentine” DVDs–which just arrived this week–to see how good they are.

Funniest bit of the night: Peggy Siegal, probably gaga from giving screenings, lunches and dinners every day and night., mistakenly introduced Gosling to the Astors as “Derek Cianfrance.” Then he was introduced to a couple more people that way. A good sport, and very polite, Ryan then chatted up his new friends as Cianfrance. He got a kick out of it. “It was some of my best work,” he told us later. “And no one got to see it!” He added, amused: “But you do it for the personal satisfaction. That’s the reward!”

PS Listen–we’re all tired. At dinner at the Standard Grill, I asked the blonde sitting with Gosling and another couple what she did for a living. Everyone started throwing things at me. “That’s Blake Lively,” they all yelled in unison. They were so right, and I was so amiss. For the record, Blake was excellent in “The Town.” I will write it 100 times on a blackboard!