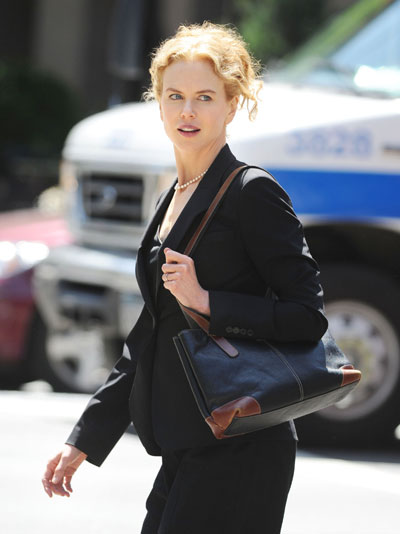 If Nicole Kidman winds up winning the Oscar for “Rabbit Hole” this season, she has one person to thank–herself. Kidman produced the movie, based on the Broadway play, and even made an off beat choice of John Cameron Mitchell (“Hedwig and the Angry Inch”) to the direct the film. It’s all worked out beautifully.

Last night, Kidman–who produced the film and is doing more of that now–arrived with a bad case of laryngitis, country superstar husband Keith Urban, and no regrets. She piloted this project to victory. Here is Kidman unplugged, accessible, wry and wise.

Before she skedaddled from the Plaza Hotel party at the Oak Room, Nicole told me–in a voice more befitting Rod Stewart– that she and Urban are spending Christmas in Nashville. She’s become addicted to Tennessee. Who would have guessed that would happen?

“Rabbit Hole” is maybe the only movie of this Oscar season to have plenty of laughs but still leave the audience weeping. I heard grown men cry last night at the Paris Theater premiere. And they weren’t even afraid to do it in front of Don Draper himself, Jon Hamm, who came with Jennifer Westfeldt, plus the “Rabbit Hole” cast–Aaron Eckhart, Sandra Oh, Giancarlo Esposito, Tammy Blanchard, and Miles Teller.

The only person missing was Dianne Wiest, the two time Oscar winner who stays away from premieres like the plague. Too bad–she’s phenomenal as Kidman’s straight talking mother. Add her to the long list of supporting actress possibilties this year along with Helena Bonham Carter, Kristin Scott Thomas, Melissa Leo, Jackie Weaver, and Amy Adams.

SAG voters should take a look at “Rabbit Hole” for Best Ensemble work, right alongside “King’s Speech,” “Social Network,” “The Fighter,” and “The Kids Are All Right.”