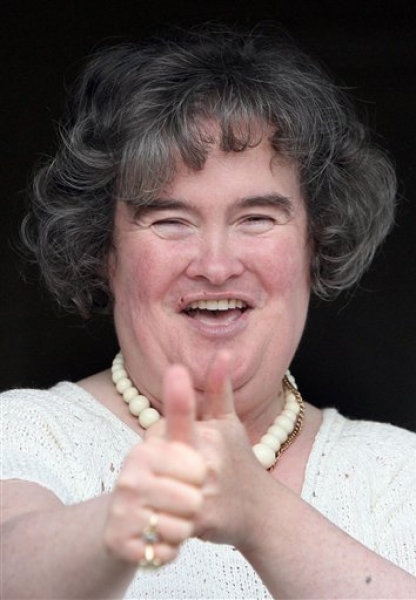 You know, I love to harpoon the record companies when they do something weird. Warner Music is a favorite subject because they can’t get anything right, don’t do much to market their new releases, and recently got rid of a slew of marketing people.

But sometimes, people get it together. Sony Music’s Columbia Records has the #1 and #2 albums this week: Susan Boyle‘s “The Gift’ sold over 330,000 copies, and Jackie Evancho‘s Christmas album did around 240,000.

This means that Rob Stringer has three big hits in the top 10. None of them are likely to go away, either. And then on December 14th, Stringer launches Michael Jackson’s “Michael.”

Columbia also has both Bruce Springsteen releases on the charts this week–his box set and the individual album, “The Promise”; plus Susan Boyle’s original album came back. Not bad!

And: stand back, because Columbia Records will be the home of “X Factor” next year.

Wait: did I mention Train, which had the most ubiquitous record of the year with “Hey Soul Sister”? (I bark when I hear it at this point.)

Even so, Stringer got strung up today when the NY Daily News, otherwise on the money, picked up some wacko story from a blog saying that Stringer was like the “Fredo Corleone” of Sony because he’s the brother of Sony chairman Sir Howard.

While not everything Stringer does is perfect–he didn’t get the new Paul Simon, for example–the numbers don’t lie. And contrary to a recent, misguided report, Sony’s Epic label was in trouble long before any of these people came along. The last time there was a sign of life at Epic was when Charlie Walk buzzed through there like Sammy Glick, making records like Shakira and Wyclef’s “Hips Don’t Lie” and Sean Kingston’s “Beautiful Girls” sizzle on radio.