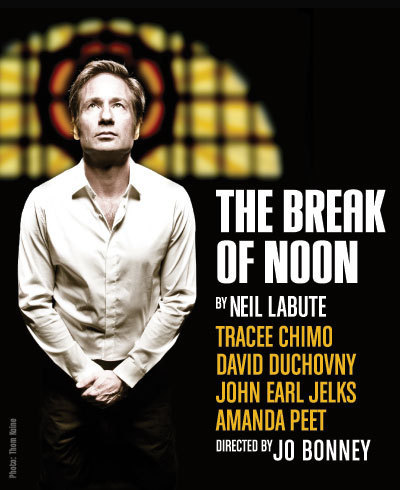 David Duchovny got a big surprise tonight. For his opening off Broadway in Neil LaBute‘s “The Break of Noon,” former “X Files” costar Gillian Anderson flew in from England. She’d told him she’d come, but Duchovny looked shocked when he actually saw her. Talk about support!

Major points to Duchovny, famous for his TV and film work. He made his stage debut at the Lucille Lortel Theater– battling a cold. When the lights went up on Duchovny as a man who’s survived a deadly shoot out in his office, he is totally alone. He’s never done a play before anywhere, he told me later. Maybe in grade school.

The theater is small; you could tell had a bad cold. But in front of his wife, Tea Leoni, her parents, aunt and uncle, plus Ben Stiller and Christine Taylor, Jessica Hecht, Eric Bogosian and an array of New York’s theaterati, Duchovny acquitted himself nicely. Even if he had to wipe his nose a few times during La Bute’s opening monologue.

Duchovny co-stars with Amanda Peet, and New York theater vets Tracee Chimo, and John Earl Jelks— all of whom make an excellent ensemble as the story of John Smith’s survival–a coworker has killed 37 people but spared him–unravels. In the process, Smith has a religious conversion, and LaBute walks carefully as he sends up but doesn’t mock John’s new found Christianity.

At one point, Amanda Peet’s character–playing John’s ex wife–demands from him, “I want the truth.” It sounded like a line from the “X Files.” Anderson told me she got a good laugh when she heard it.

Duchovny told me later he’s no longer terrified when he steps on the stage. Still, it takes a lot of courage to do what he’s challenged himself with. Luckily, it goes very well. The short run ends December 22nd, when the rest of the cast heads to L.A. What about Duchovny? “I’m staying here,” he said. “I have a family.”

Tea Leoni, standing just to his side, nodded happily in agreement.