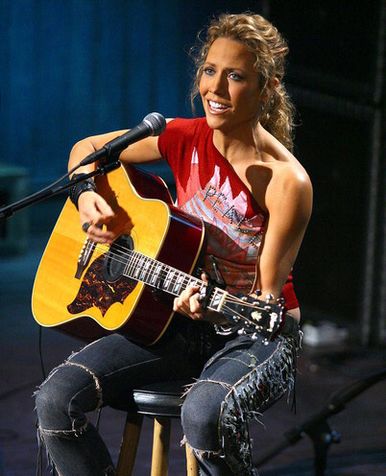 Sheryl Crow put on a live show Thursday night for the venerable Samuel Waxman Cancer Research charity. This is a big annual event that brings in deep pockets from Wall Street. By the looks of things, the group took in between $3 and $4 million during the evening. Not bad.

But it was Crow’s performance that everyone waited around for, and she didn’t disappoint. The cancer survivor brought her whole band, with back up singers, and keyboardist, and played for nearly an hour. (Not for free, either.)

Most of the set was cover songs, which seemed to put her in a good mood. Her own “You’re My Favorite Mistake” rocked harder than expected. It was only toward the end of the non-encore show that she tossed in more recognizable hits like “If It Makes You Happy” and “All I Wanna Do (Is Have Some Fun).”

(Some said she was already back in one of her two Manhattan apartments before the backup singers were in their dressing rooms.

During an early number though, Crow found some kids at the foot of the heavily guarded (ridiculously so for a private event) stage. She leaned down and said to one kid, “How old are you? I’ll be a cougar. I’m 48.” She then joked, “Is your dad single?”

Note to Sheryl: if you’re really shopping for dates while on the road, brush up that road crew and security you’ve got. They’re no way to meet people.