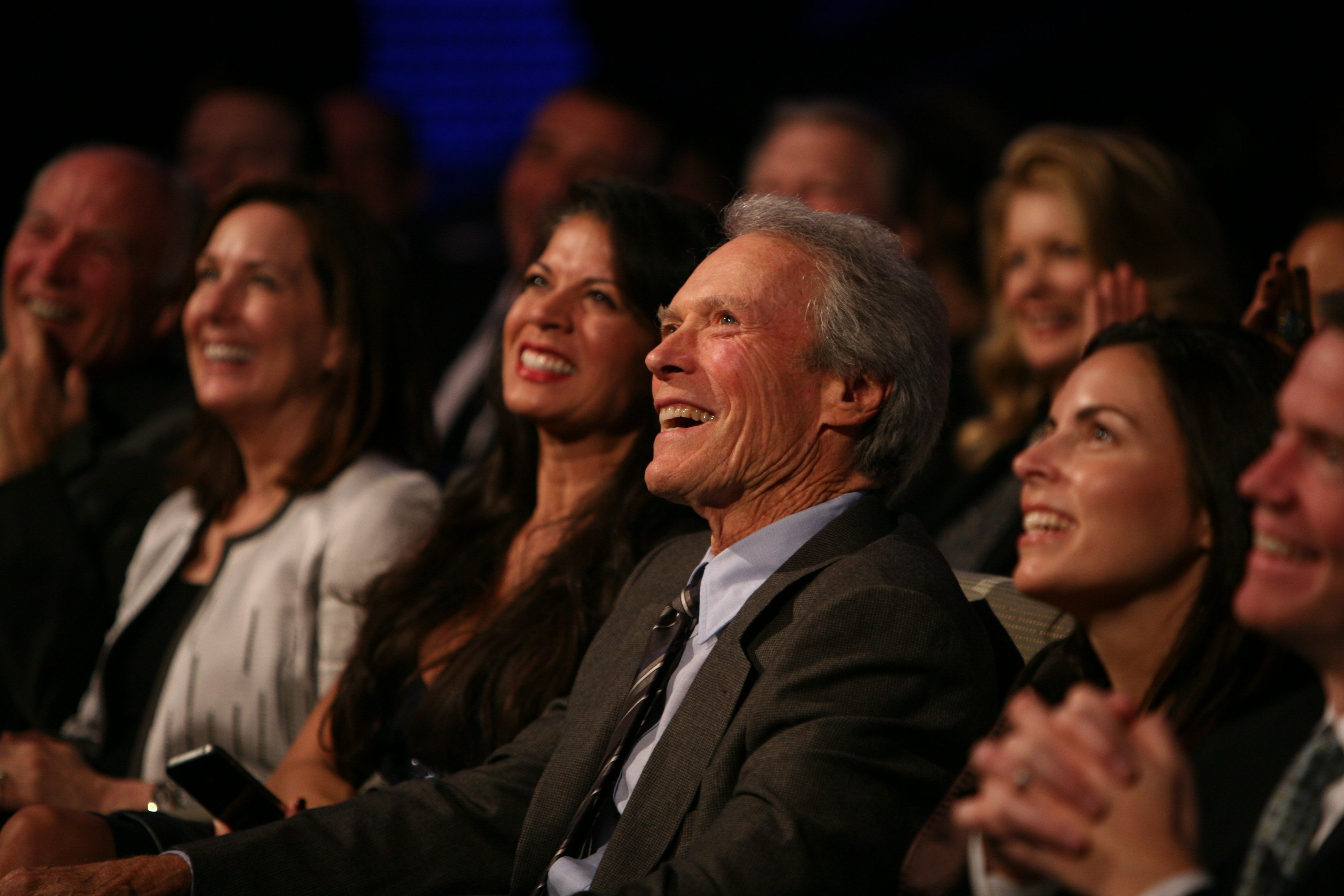 A Clint Eastwood tribute at the Museum of Tolerance in Beverly Hills? Leah Sydney reports from LA for us: You know there’s going to be a Mel Gibson joke.

It came early in the evening from master of ceremonies George Lopez. “Tonight we’re honoring a true Hollywood Icon Clint Eastwood-the roles he has chosen as an actor, the loner trying to do right,  the underdog. As a director he’s chosen films about personal struggles, freedom and dignity.  So it is fitting that you are being honored tonight.  By the way I was a little disappointed that the construction on the Mel Gibson wing has stopped.”

He added: “This is an amazing organization. Latinos have a Museum of Tolerance in Arizona.  Nobody goes.  You have to jump a wall to get in.”

Everyone was in on the act, from Rabbi Marvin Hier to Arnold Schwarzenegger to Eli Wallach. (Clint’s lovely wife Dina, pictured with her husband.) It was all to kick off the Museum’s first film festival, called MOTIFF.

Rabbi Hier told the intimate VIP crowd.  “The clergy loves Clint Eastwood for righting those who have been wronged and forgotten and for confronting the purveyors of darkness with his unique of  his own Miranda rights, “Go Ahead, Make My Day.”

Eli Wallach–who’s almost 95 and had just received his Lifetime Achievement award from the Academy the night before-  handed Clint a birthday card..which he opened up –and the theme of the Good Bad and The Ugly played. Wallach then later told the story that:

“I spent a night once in bed with Clint Eastwood.  I know it sounds strange, but when we were filming it-we went to Spain. The hotels were full, so we stayed in Clint’s friends apartment.  There was one room, so Clint asked, Which side do you want to sleep on?  Me , being an old radical, said “I’ll take the left side.”

Arnold Schwarzenegger said: “I love this guy.  Ever since I was in Austria as a kid watching his movies.  I know He doesn’t like to admit that he’s a few years older than I am .  But he was an inspiration to me to come here to America.  To be an actor and a leading man who would be in action movies.  I would not have done The Terminator if he had not paved the way for great action movies. If he wouldn’t have    ‘Make My Day’ and all those kind of lines. It made me follow with ‘I’ll Be Back’ and those kind of lines. He’s an extraordinary director and actor.  Between the two of us we have five Oscars. They’re all his..but who’s counting? This guy is just a legend and bigger than life.”

“On the way down here, somebody cut us [Clint and his wife Dina] off in traffic. He pulled around in front and he gave me the finger.  So I  rolled down my window  and started to yell.  My wife said Clint, you’re getting a Tolerance Award.”

After the laughter died down, Clint continued:

“Hey, his cat might have died in the morning.  I realized, whenever you have an argument in traffic or something, you never know if someone is coming from a funeral or something. It’s food for thought. You don’t have all the facts ever.

“I want to thank Eli,  but Eli, the bed was not that narrow.

Revisiting all those film clips is a great novelty for me. I’m 80 now, I wouldn’t normally admit that except that Eli is here.  That makes me feel young.  He’s saying Oh to be 80 again and I’m saying oh to be 70 again.  It’s all relative.  “