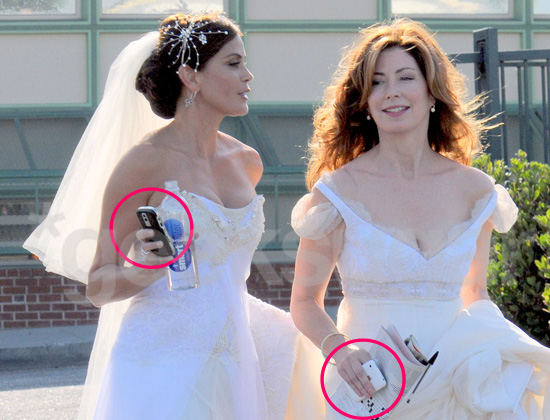 The Patriots were so far ahead of the Steelers Sunday that I was able to switch over to ABC a couple of times.

Guess what? Both “Desperate Housewives” and “Brothers & Sisters” are still on the air. Who knew?

“DH” is simply awful and interminable. Granted, it was never very good. I watched a bit of the 2005 spring season when I was stuck in Santa Maria, California covering Michael Jackson‘s trial. Back then, it was a novelty. But the creators blew the big mystery of why the narrating character, Mary Alice, killed herself. It was incredibly convoluted. They killed off their best male character, Rex, played by Steven Culp. You knew they had no idea what they were doing.

I did watch when Dana Delany and Kyle Maclachlan were on; she was terrific. But the rest of it is nonsensical. Granted, I wandered in last night without a playbook. But nothing much has happened, silliness reigns. Felicity Huffman, an Oscar nominee, has been given drivel. Last night Teri Hatcher, a beautiful woman, was concerned about a baby crying. Nicollette Sheridan is gone. Bree is sleeping with David from “Beverly Hills 90210.” Yikes. Cancel this thing. Let it be done.

“Brothers & Sisters” started out as a pretty good soap opera about a wealthy family with a business and a lot of secrets. It is also, now, drivel. Or more drivelish. Sally Field can do no wrong, so she makes everything seem all right. You can’t touch Rachel Griffiths, and Matthew Rhys is very talented. But last night’s show, like the week before, was not about the business. Holly (Patricia Wettig) is AWOL. So was Ron Rifkin. With both of these series, the writing is very limited. They’ve never found the groove of “Knots Landing,” the supreme nighttime soap. They have no overarching plot, or story. And by now, who cares? And, more importantly, the Patriots are as annoying as the Red Sox.