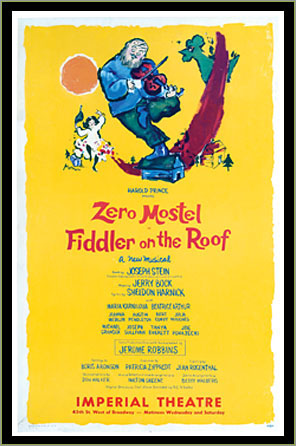 Jerry Bock died today. He was the gifted composer, with Sheldon Harnick, of the score of “Fiddler on the Roof.” He was 81, and had had a stroke a few days ago. Here’s a link to the story from Playbill. http://tinyurl.com/2f7bncf

Bock died just ten days after the passing of 98 year old Joseph Stein, who wrote the book for “Fiddler” from the stories of Sholom Aleichem. Now only Harnick, who’s 86, survives from this incredibly talented trio.

“Fiddler” remains a high water mark in Broadway musical history. At one point in the early 70s it was the longest running musical on Broadway. With its poignant and nostalgic story of Jews leaving Russia, and a score–what a score!–that includes so many well known songs–the title song, “If I Were a Rich Man,” “Sunrise Sunset,” “Far from the Home I Love,” “Tradition”–there is nothing else like it.

Mazel tov, and Shalom. Considering what’s coming up this week musical wise on Broadway, these men will be sorely, sorely missed.