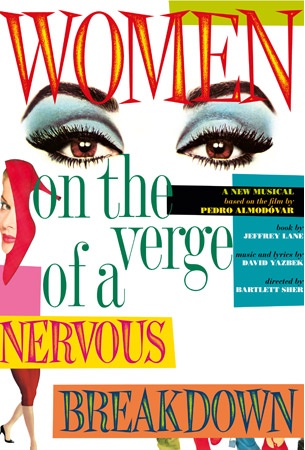 A musical adaptation of Pedro Almodovar’s great film, “Women on the Verge of a Nervous Breakdown,” opens this Thursday on Broadway.

The show has a lot of negative buzz. A blog in the New York Times (which helped itself to our “King’s Speech” scoop last week) noted that the opening number from the Second Act had recently been moved to the opening of the First Act.

Still: there’s bad a smell in the Belasco Theater, recently refurbished most beautifully.

The problem comes from a fire that’s started on stage. A real fire. As in the movie, the main character, Pepa, sets her bed ablaze. At the Saturday matinee, the fire was quite lively. And when it was put out, the white smoke it generated billowed up to a giant fan set way above the stage. Unfortunately, the odor from the smoke never subsides. Through the rest of the show, it smells like rubber and steel are burning. Even toward the end of the show, there’s a faint memory of the fire.

And the fan: during quiet scenes, you can hear it. Either that, or Madrid is just noisy 24/7.

“Women on the Verge” has a bunch of big Broadway stars: Patti LuPone, Brian Stokes Mitchell, Laura Benanti, and Sherie Rene Scott are mixed in with a pretty big cast. I kept wondering if they could smell what was going on. I guess we’ll find out later this week!