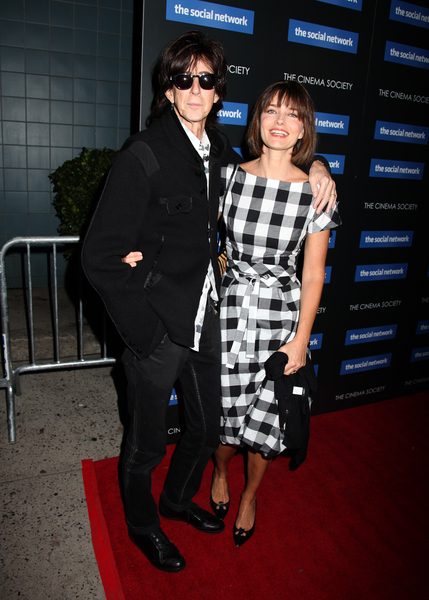 After much speculation and some blogs trying to piece together the story, here it is: Ric Ocasek confirmed for me last night he and the Cars have made their first new album together since 1987.

Ocasek and his drop dead gorgeous wife, Paulina Porizkova, were among the guests last night at the Huffington Post’s Game Changers event in Soho. Porizkova often blogs for the web site.

Among the other stars at the event were Sean Penn and writer Nora Ephron, each of whom won awards, as well as Arianna Huffington, Joe Klein, Lewis Lapham, and Nick Pileggi. Penn skipped out a little early for dinner at the Waverly Inn with his daughter, Dylan, 19, and pal John Sykes. Sean told me that today (Friday) he heads back to Haiti, despite the recent outbreak of cholera. “You can’t get cholera,” he reassured me. “I’m even taking my mother this time.”

Meanwhile, Ocasek was brimming with news that he and the remaining members of the Cars have made a new album. “It actually sounds like a modern version of the Cars,” he said, proudly. Missing, sadly: Benjamin Orr, who died in 2000. Orr wrote and sang the Cars hit, “Drive.” He also had a solo hit following the band’s breakup, called “Stay the Night.”

The band made the album with their own money, so they’re not under any pressure from a record label. They may return to Elektra, which Ocasek says Warner Music Group–a mess, by any standards, is trying to revive. “They’ve even talked to Jac Holzman,” he said of the Elektra leader during its heyday.

Ocasek told me that reuniting with the band has been a pleasure. “I was amazed at how we clicked when we got back together,” he said.