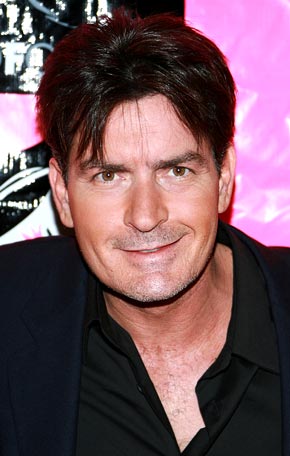 Charlie Sheen was also in the Plaza Hotel last night.

According to reports, the police were called at 2 am because Sheen was drunk, naked and causing trouble.

He was there with his ex-wife, Denise Richards, and their two kids. They’d seen “Mary Poppins” earlier in the evening. Richards is in town to promote a show she’s working on. Why Sheen was with them remains a mystery.

‘Reports say police came because Sheen was trashing his room, throwing furniture around. A chandelier was damaged. Was he swinging from it? No one knows.

This would be more the realm of a rock star than a TV star. If Sheen had been lonely, he could have gone downstairs to the “For Colored Girls” party in the Oak Room. I doubt the “Driving Miss Daisy” crowd would have been so welcoming.

Sheen and Richards, of course, had a terrible, nasty public divorce. That was before his terrible, public nasty separation from Brooke Mueller, which sent him to jail and rehab, and her to rehab, all of them into the tabloids. Sheen got a 30 day suspended sentence and avoided jail, too.

What’s with this guy? He just recently walked his 25 year old daughter down the aisle at her wedding. He has five kids altogether (two each with Richards and Mueller), and has never had a day of peace in public during his entire career. It’s not like he comes from a broken family. His parents, Martin and his wife Janet. will be married 50 years next year.

The Plaza has a history of famous people having meltdowns. Daniel Baldwin, anyone?