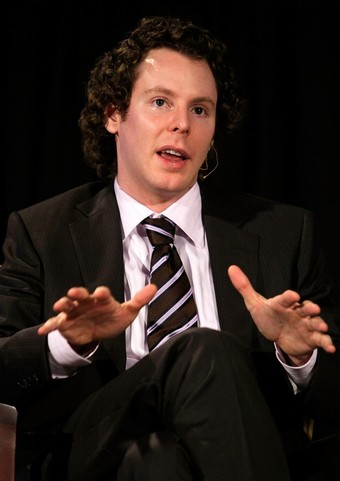 Parker was busy meeting and greeting all night, shaking hands, and looking good in a suit a little like Clark Kent. It seems like he’s settling into New York. If he doesn’t stay in his rented townhouse, he’s going to look for something else.

Of course the irony of Parker being at the Rich event is that so many people from the record industry were in attendance. Parker’s Napster started the downloading craze–and may have wrecked the business as it was known.

Still, Parker told those who asked that he never said the line spoken by Justin Timberlake–playing him — in “The Social Network” about Tower Records being gone.

Someone else said to Parker: “I’ve been to all your parties.” Parker responded: “I’ve only had two parties.”

Parker did cross paths with legendary music man Clive Davis, by the way. But it lasted one second, and was good for a photo op. Davis is still selling boatloads of new records by Santana, Rod Stewart, Alicia Keys and others despite what Napster wrought.