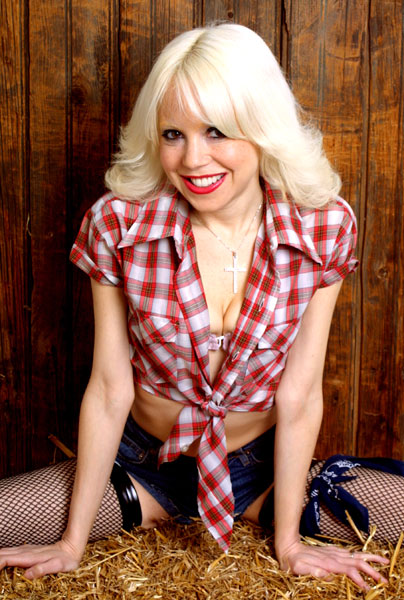 It’s become a cliché, to say of an actor who portrays a famous personage with jawdropping precision, that he or she is that person. And so it is with Tammy Faye Starlite, the infamous born-again Christian country music evangelist, whose Triple-X, virulently anti-Semitic shtick can leave audiences sore from laughing so long as their taste for outrage is without limit.

But the brilliant Starlite, who in reality is a former Yeshiva student, has rested the Starlite character to embody the very real Nico, the legendary German rock chanteuse most famous for three songs on the Velvet Underground’s historic Andy Warhol-co-produced 1967 debut album “The Velvet Underground & Nico,” and seven ensuing studio albums recorded before her death in 1988 after a bicycle accident.

Starlite premiered her tribute “Chelsea Mädchen” (titled after Warhol’s 1966 film “Chelsea Girls,” which she starred in; “Chelsea Girl” also being the titletrack of her 1967 debut solo album), at Joe’s Pub in July, winning over skeptic Danny Fields. Nico’s friend, Fields facilitated her signing to Elektra Records in the late 1960s and is justly famous, too, for managing The Ramones and working closely with other rock icons including The Stooges and The Doors.

Fields didn’t think anyone could capture the essence of Nico–and therefore shouldn’t even try. But after seeing her initial Joe’s Pub performance of “Chelsea Mädchen,” he gave her his invaluable imprimatur.

“It was like receiving holy manna!” Starlite told me prior to her “Chelsea Mädchen” presentation last night at Theater 80 St. Marks (part of the annual East Village HOWL! Festival benefiting the Actor’s Fund). “He invited me over to listen to a tape of a phone conversation with her in 1971, and you could hear the pleading in her voice even at that point. She wasn’t destitute yet, but seemed to have an enormous gaping need that I think was filled by drugs.”

Drugs indeed. Nico was a notorious junkie, not at all surprising considering one of the key songs on “The Velvet Underground & Nico” is “Heroin.” But Lou Reed sang that one. On the record–and in the show–Starlite sang Nico’s Reed-written tracks: “Femme Fatale,” “All Tomorrow’s Parties,” and “I’ll Be Your Mirror.”

“Lou never liked me for what my people did to his people,” Nico/Starlite said after “I’ll Be Your Mirror.” “I can’t make love to Jews anymore!”

Knowing audience members tittered at the tie-in to her Tammy Faye shows, but it was likely indirect for most of the spoken-word parts of  “Chelsea Mädchen” were scripted from actual transcripts of Nico interviews and various music books and biographies; in the show they take the form of a Q&A with an actor portraying an Australian journalist, whose casual demeanor and attire (he wears a Led Zepp t-shirt, as he’s particularly fascinated with Nico’s early collaboration with Jimmy Page) are diametrically opposite to the monotonic-speaking Nico, dressed in all white at the start of the show, then in black after a brief entr’acte midway.

The costume change, during which the band jams on The Velvets’ “I’m Waiting For The Man,” is a revamp from the Joe’s Pub version, and was designed to distinguish between the early Velvets side of Nico’s career and her solo, addicted stage.

“I’m trying to convey her intelligence and power,” said Starlite, who became enamored of Nico in her teens after reading a bio of Warhol superstar Edie Sedgwick--the subject of “Femme Fatale”–and buying a Nico cassette. Like many other artists she was enthralled by Nico’s enigmatic voice and supernatural beauty.

“She had this constant inner monolog going on, that in some genius, nonlinear Jungian collective unconsciousness way was strangely calculated and related to whatever was going on at the time,” Starlite continued. “She showed no sentimentality or frills or trills or vocal tricks, and was all very straight on, singing from inside. So there was nothing false in what she did, no caving into commercialism–which I admire about her so much.”

Starlite performed other songs associated with Nico’s solo career, including Bowie’s “Heroes,” Rodgers and Hart’s “My Funny Valentine,” Dylan’s “I’ll Keep It With Mine” and The Doors’ “The End,” ending with “Deutschland Über Alles.” She maintained Nico’s intensity throughout, even when hampered by a momentary feedback problem, and an annoying flying insect–at which she glared, ever in character.

“It was a pinpoint performance,” Fields kvelled afterwards, then hastily amended, “not that pinpoint!” He was especially thrilled to hear “Deutschland Über Alles” “with all the right words.”

Starlite returns to Joe’s Pub with “Chelsea Mädchen” this Monday, October 25th.  She hopes to take the show to Broadway a la Valerie Harper’s recent “Looped” enactment of Tallulah Bankhead–and doesn’t at all mind that Nico is hardly a household name. Then again, that’s the point.