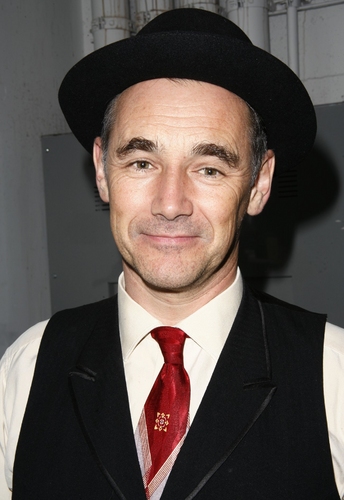 I can’t really tell from Ben Brantley‘s review in the New York Times whether he liked “La Bete” or not. But the sizzling play opened on Broadway last night and Mark Rylance gave a tour de force performance. He is just sensational as Valere, and audiences will love David Hyde Pierce and Joanna Lumley (famous from “Absolutely Fabulous”).

Early on in David Hirson‘s 1991 play, Rylance makes his appearance and gives what amounts to a 30 minute comic monologue. It only seems like a dialogue because Hyde Pierce, who is with him on the scene, manages to take his character’s stunned silence and turn it into conversation. By the time Lumley enters–and she has some spectacular entry–the audience is mesmerized and exhausted.

It’s the second time in a row for Rylance and director Matthew Warchus. Their last hit was “Boeing Boeing” in 2008.

In last night’s audience were Angela Lansbury, Marian Seldes, Matthew Broderick, Christine Baranski, Kathleen Marshall, and Cynthia Nixon at least. Not bad for a very rainy night on Broadway. And the set for this show is so compelling, there were lots of stragglers hanging around the stage after the curtain fell. I caught Victor Garber (from “Alias” and so many other things) in deep conversation with Seldes.

“La Bete” only runs through February, so catch it as soon as possible. This is the kind of Broadway show where you’ll want to be able to say you saw it, and impress the people who missed it or couldn’t get in.