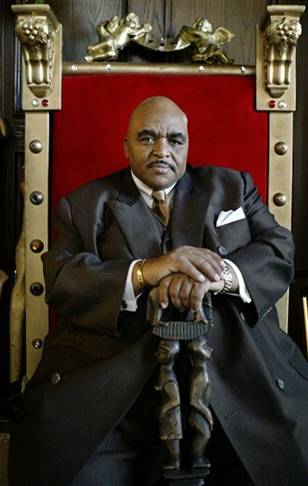 Solomon Burke is dead today at age 70. His death is not a total surprise. Solomon was a huge man physically who performed sitting on a gigantic gold throne with a red velvet seat. When he traveled, it was double everything. Or triple.

A few years ago, when we went to the Poretta Soul Festival in Italy, Solomon had to stay an hour or more away in Bologna because there were no hotels with rooms or beds big enough to accomodate him.

But Solomon’s physical size was equal to his genius and his reputation (he had 21 children), and certainly the depth of his talent. His gospel tinged voice was one of the few remaining from the legendary era of Atlantic Records magnificent heyday. Who remains now: Aretha Franklin, Sam Moore, Mavis Staples, Carla Thomas, and a handful of other soul stars like Smokey Robinson, Fontella Bass, Chuck Jackson, Dionne Warwick, Cissy Houston from other labels.

If you don’t know Solomon’s name right away, that”s okay. He was never a Top 40 artist. In many ways, he was like James Carr, the Memphis soul singer who was best known to black audiences and had a cult following.

His biggest hit was his first, “Just Out of Reach,” from 1961. But his immense talent carried him through several generations, and many more hits on the R&B charts. The best of those included “Cry to Me” and my favorite, “Got to Get You Off of My Mind.”

Solomon remained a favorite in the Atlantic family through the 1990s. Jerry Wexler, who produced his records, held him in the highest regard. Their relationship in the studio was also one of legend.  Solomon brought his throne and his band to Ahmet Ertegun‘s memorial concert in London in 2007. Mica Ertegun, Ahmet’s elegant widow, came backstage to see him. She told Solomon and Sam Moore that they were the two performers she’d really insisted on for the show.

Solomon was rediscovered about fifteen years ago, and went on to make several new CDs with contemporary writers and singers who admired him like Elvis Costello and Van Morrison. But mostly I will remember him as a gentle soul with a big laugh and a generous sense of humor, a lovely man who knew how to wear a gold lame cape like no one else.