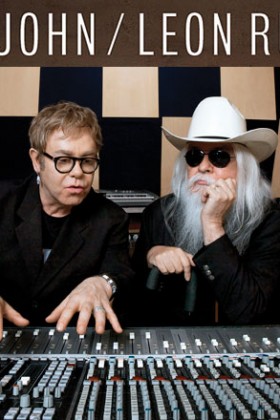 I’m kind of kvelling (which is Yiddish for tweeting, I think) about Elton John and Leon Russell’s album, “The Union,” set to be released on October 19th.

Sorry I can’t wait ten more days. And also, it’s a collaboration among Elton, Leon, and Bernie Taupin, the lyricist who must be given dollops of credit. This trio has fashioned a landmark album, the kind of thing we used to take for granted in the good old Seventies and even Eighties.

“The Union” is indeed a union of these remarkable talents, but not only them. The group of musicians included comprises Neil Young on a surprise vocal, Rose Stone (sister of Sly) on percussion, and a group of legendary vets like Jim Keltner, Marc Ribot, George Bohanon, Robert Randolph, and Don Was. The whole package is produced by T Bone Burnett with wit, grace, intelligence, and a true understanding of all these musicians’ artistry.

First of all, how cool is Elton John? He’s given the lead single to Leon Russell. “If It Wasn’t for Bad” just made this year’s eligibility date for the Grammys—the album comes out 19 days too late. But if the NARAS voters don’t put this in Best Song and Best Record, then the whole awards process is a waste. With no less than Booker T. Jones on B3 organ and trombones wailing away—and a tuba!—“If It Wasn’t for Bad” is real music. It’s a glorious slice of authentic Southern sweet potato pie dripping with melted English toffee.

And then “The Union” begins. There are some of the best Elton John-Bernie Taupin songs ever, like “Monkey Suit” and “When Love Is Dying” as well as an unexpected hit from Leon and Bernie, a couple of great Russell numbers, and an Elton-Leon knockout called “A Dream Come True.” Neil Young sings on “Shiloh,” which is sort of the title track. And there’s a magnificent track called “There’s No Tomorrow,” composed by Elton, Leon, T Bone Burnett and James Timothy Shaw.

Elton told me about this project last winter, and we talked about how much Leon Russell had influenced his early records like “Tumbleweed Connection” and “Honky Chateau.” Coming back to this inspiration now, Elton sounds rejuvenated. I can only hope that he gets to sing Russell’s “Tightrope” when they perform in concert, and Russell can break loose on “Honky Cat.”

By the way, neither Leon Russell nor Bernie Taupin is in that ridiculous Rock and Roll Hall of Fame. But Donna Summer is on this year’s list of induction nominees. So that tells you how much that group’s reputation has been diminished.

Don’t hesitate—go now to Amazon or ITunes or wherever and pre-order “The Union.” It’s the best album that will be released in 2010, and maybe 2011 as well. (Certainly including 2009 and some of those other years.)