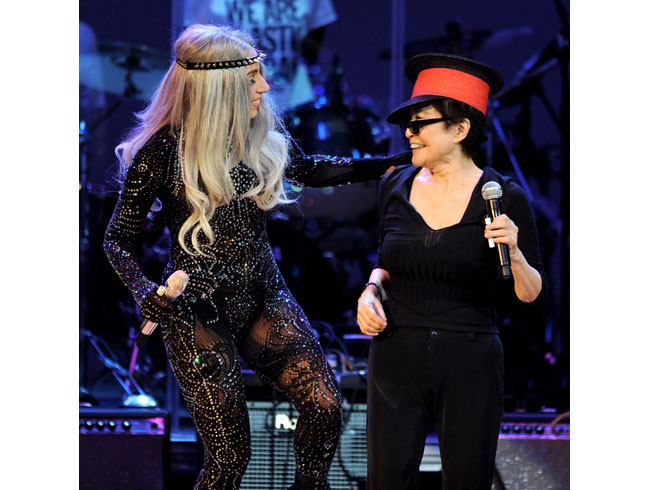 I couldn’t make this up if I tried. Yoko Ono celebrated John Lennon’s 70th birthday by giving herself a tribute in Los Angeles. On Saturday, John’s real birthday, she’ll be in Iceland. John Lennon was always associated with Iceland, as everyone knows. Whatever.

Here’s the report from my favorite music industry website, hitsdailydouble.com:

“Yoko Ono celebrated her late husband John Lennon’s 70th birthday the only way she knew how, with an all-star tribute to her own music at the downtown L.A. Orpheum Theatre Saturday night, the second of two shows  in which son Sean Lennon led a newly reconstructed Plastic Ono Band through a selection of his mom’s greatest hits.

After an hour-long set that included her harrowing disco hit, “Walking on Thin Ice,” a series of guest stars, including actors Joseph Gordon-Levitt, Carrie Fisher and Vincent Gallo, along with Perry Farrell, RZA, Sonic Youth’s Thurston Moore and Kim Gordon and the warmly received experimental duo Tune-Yards, performed Yoko songs from throughout her career, as the guest of honor caterwauled and squawked in her patentede avant-garde bird calls.

The only John Lennon song (and the show’s sole “sing-along moment”) came with Sean and Paul Simon son Harper’s touching rendition of “Oh, Yoko.” The highlight was Lady Gaga, who appeared in a sheer, sparkly black pant-suit that showed off her own “Bottom,” perhaps a tribute to Yoko’s avant-garde film of the same name, as the two ended the evening writhing around together on top of the piano like Michele Pfeiffer in The Fabulous Baker Boys, Gaga thanking the pioneering Ono for “being so brilliant and such an inspiration to so many women.”

Those expecting versions of “Cold Turkey” or “Imagine” went home disappointed, though there was a closing jam on “Give Peace a Chance.”