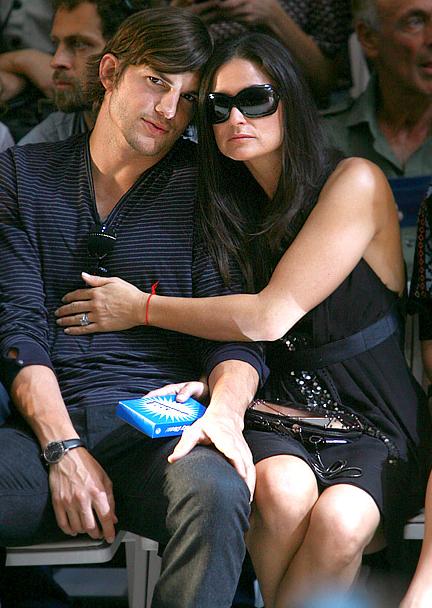 I know Ashton Kutcher and Demi Moore are serious about stopping human trafficking of children. They want to be the Brad and Angelina of slavery. Well, why not?

They appeared at the Clinton Global Initiative, where miscellaneous celebrities speak on a variety of topics. The CGI (which does not stand for Computer Generated Images) also this year inspired Jim Carrey, of all people, to come talk about rice. CGI is sort of like the old Joe Franklin Show, where Topo Gigio the mouse would be asked his opinion on nuclear disarmament, or U Thant would review Joey Heatherton’s latest show.

Ashton and Demi, same week, are featured on the cover of People magazine. Are they splitting up? Did he cheat on her, People wonders? If People–not trash mags–are putting this on the cover, there’s something serious going on.

Slavery, Ashton declared from the podium of CGI, is still going on. “I’m sure Abraham Lincoln would be upset about this,” Ashton said. No doubt.

A rep for Ashton and Demi’s new charity, called the Demi and Ashton Foundation, or DNA, not registered anywhere yet, said we have to get the bad guys. She called them “bad actors.” I kid you not.

“When I was in school, I didn’t learn about sex slavery…this is people treating people like people! We can all do something about that…When we’re sitting down with our girls at the dinner table talking about human trafficking, it’s awkward and really gross …It’s not so different as gay rights issues. People got courageous. Men got courageous. They stood up and said, Wait a second. He’s not a fag. He’s a guy. He’s a human being, just like me…”

Meanwhile: Jim Carrey has something called the Better U Foundation. Since 2008. No registration for the charity. But a website.