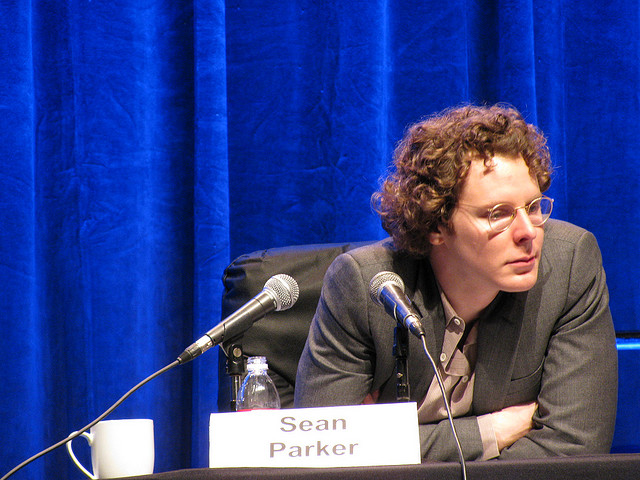 Sean Parker was not at the premiere Friday night of “The Social Network.”

That’s NOT in capital letters. His lawyer and his rep each informed me, with the urgency of their living rooms being on fire, that Parker was “at home” and “with his parents” spending a “quiet night.”

Yes, Sean Parker who started Napster, was bounced from it, expurged from another web start up, and then depicted in “The Social Network” as a cocaine cowboy (a 2005 arrest, no filed charges) who rambunctiously sleeps with all the pretty assistants and gets thrown out of daily contact at Facebook by Mark Zuckerberg.

Was he home knitting? I asked the lawyer and the rep. Making cookies for the elderly? Giving $100 million to a burnt out inner city?

Ha ha. But you see, dear reader, I live on s small street. Sean Parker is renting a house in the middle of the street. All day yesterday there was a lot of coming and going from said house. Indeed, the parents–who are from Virginia–might not have appreciated yesterday’s local rarity. Apparently an older woman — maybe 80–hanged herself in her apartment right across the street from Parker’s rented house. There were police cans and an unmarked car and a good deal of commotion on our very quiet block.

That was Saturday afternoon. On Friday night, around 1:30am, really Saturday morning, as I parked on the street across from Sean’s driveway and in front of the suicide home, Parker’s garage door suddenly opened. A Lincoln town car backed out. No one was in it. It sped away. This confirms that Sean Parker was not at “The Social Network” premiere. He was in his house, with his parents.

I guess Sean is still with Facebook because his lawyer added, “No one associated with the Company attended the premiere or its after party, including Sean Parker.”