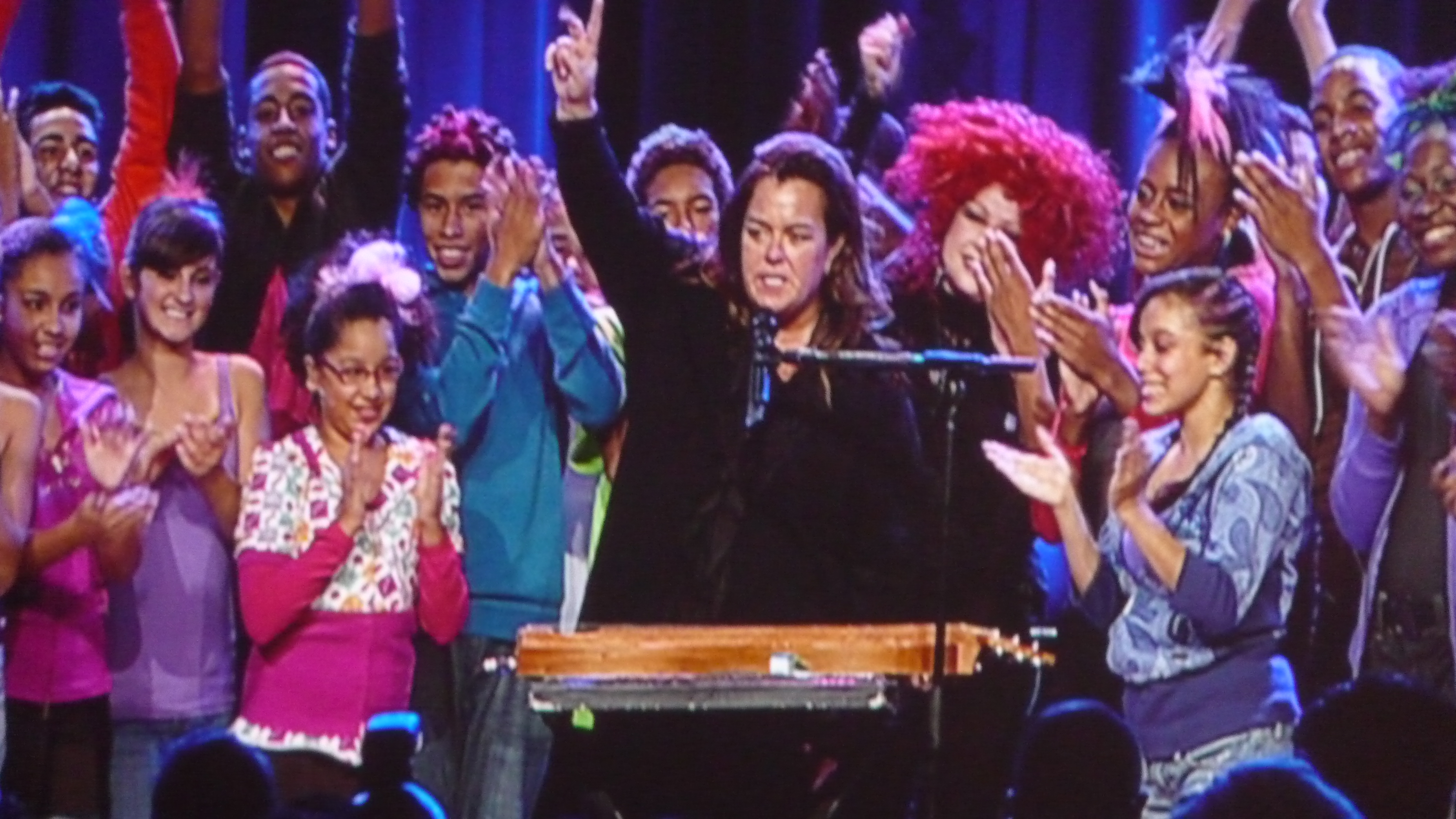 Rosie O’Donnell is a busy woman these days.

As she gets ready for her return to daytime TV next fall with a talk show on Oprah’s OWN Network, Rosie is also wearing another hat. She’s got a deal to produce one documentary per month for OWN. She’s not just sitting around. The first one is about Chaz Bono, the son/former daughter of Cher and Sonny Bono.

I”ve seen some of the footage,” Rosie told me last night at the annual fundraiser for her Rosie’s Broadway Kids. “It’s amazing.”

What’s also amazing is that last night we saw the first graduating class from Rosie’s Broadway Kids–which is considering a name change to Rosie’s Theater Kids, she says, “because too many people we were just for kids who were already on Broadway.”

Not so at all. Rosie’s Kids are amateurs, drawn from schools all over the city. They convene on West 45th St. at the Maravel Center, which Rosie built, and where they get top notch theater instruction. Last night, Cyndi Lauper cried as the entire school population opened the night with a brilliant medley of her hits. It was a stunning presentation. Later, when she came on to perform her hits, Cyndi quipped: “I hope do these as well.” Don’t worry: she did, and then some.

For the last couple of years, Rosie’s Broadway Kids had skipped the big hotel ballroom fundraiser and did smaller events. “But things are better, we think,” Rosie told the huge crowd in the Marriott Marquis ballroom. All told, the night raised over a million dollars. The live auction alone brought in around $250,000.

(It was a nice counterpoint to the other big party in town, where “Greed Is Good” was being celebrated by the “Wall Street 2” crowd at Cipriani on 42nd St. “It costs $50,000 just to walk in the door,” said one guest about the banquet hall’s costs, and who marveled at how much money was being spent, yet again, to launch the Oliver Stone film. Over $2 million alone was blown in Cannes last May for the same purpose.)

In the room: Suze Orman, Fran Drescher, and Tyne Daly.

On stage Rosie let slip that she’s returning to the next season of Larry David‘s “Curb Your Enthusiasm.”

“Larry and I have a terrible fight after a woman gives each of us her number,” Rosie revealed. It sounds like a great episode.

Rosie’s son Parker, who’s just started high school and is a great kid, was there. Also present were Rosie’s girlfriend Tracy Anders, who is extremely pleasant, and Anders’ eldest adopted daughter. (Anders has six kids, she told me, ranging from 6 to 18.)

Rosie told Cyndi after the show that her daughter, Chelsea, age 13, had recently dyed her hair purple. Lauper, wearing a sort of fire engine red wig in a style best described as Helena Bonham Carter from a Tim Burton movie, laughed. “I think she did it in tribute to you,” Rosie said to her friend.

Girls, you know, just want to have fun.