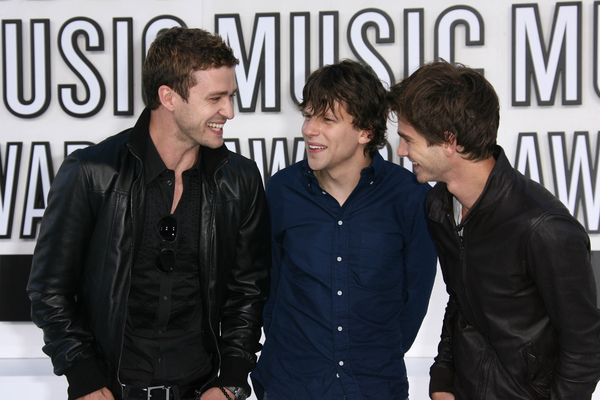 I’ve been thinking about “The Social Network” a lot since I saw it last Thursday afternoon. “West Wing” creator Aaron Sorkin‘s telling of how Facebook came to be has already generated so much buzz you’d think it had been released. In fact, it hits us this coming Friday as opening night of the New York Film Festival and then on October 1st in theaters.

(Note: This is very much a writer’s movie. But David Fincher directed it. And it’s more the David Fincher of “Curious Case of Benjamin Button” than “Se7en” which is what throws you. The blood and guts are now in the making of a business.)

Everyone tells me that “500 million people are using Facebook!” This column has a Facebook page. But the charms of Facebook elude me, frankly.  It doesn’t excite me on its own. Scott Rudin, the peripatetic producer of the film, emailed me: “Don’t be the guy who saw ‘2001’ and said, “What’s that black rock?”

No, I get it. “The kids” tell me they’re not even using email anywhere, but communicating through Facebook.  It’s BIG.  But Sorkin’s movie is a different matter. I don’t know whether it’s true or not, or what happened “in reality” among all the different young guys involved in Facebook’s genesis. All I know is “The Social Network” is a great movie about friends who trusted each other and fell out as they created something that’s changed a generation and created a culture.

Sorkin was smart to make the movie about the human dynamics of Mark Zuckerberg, played I think brilliantly by Jesse Eisenberg, and his pals. Long after Facebook is replaced by something else (and it will be), it’s going to be these relationships that everyone will remember from “The Social Network.” In that way, the movie recalled for me “Broadcast News,” a movie whose values seem quaint now, but its heart still beats as if it were brand new.

Eisenberg (whom I loved in “Roger Dodger”) is not alone. Andrew Garfield is sublime as Eduardo Saverin, the scorned friend who starts the Facebook business with him at Harvard. Of course, Saverin’s story is the basis for the Ben Mezrich book upon which “Social Network” is loosely based. So Saverin comes off the most sympathetic. But into this equation comes the third part of the triangle, Sean Parker, creator of Napster, who upends everything. A triangle is formed. As the hard partying Rasputin like Parker, Justin Timberlake prances around looking for — and making trouble everywhere. It’s a delicious performance.

Sorkin has framed “The Social Network” with the lawsuit that developed — it would seem –thanks to Parker’s interference in Saverin’s relationship with Zuckerberg. But then there’s more legal action, courtesy of the wonderfully named Winkelvoss twins, Tyler and Cameron. This pair of six foot five Aryan looking Harvard rowers claimed that Facebook was their idea, and that Zuckerberg stole it. So they come to the table, too, with their lawyer. And Armie Hammer, grandson of the late real life billionaire magnate Armand Hammer (yes, the baking soda), plays both twins. He’s one on his own, and his face is placed by computer on the body of model Josh Pence. Got that? The Winkelvosses become Sorkin’s device, a Greek chorus you could not make up.

Between the Winkelvosses and Eduardo and Justin Timberlake creeping around as Sean Parker, “The Social Network” is like a grand opera with Zuckerberg center stage as the clueless heroine. In fact, with billions of dollars at stake, the only thing anyone can agree on is that Zuckerberg “isn’t in it for the money.” He’s just an inventor. And as Eisenberg plays him, maybe someone with a touch of Asperger’s Syndrome. (There’s no evidence of that being the case with the real Zuckerberg.) Certainly the extraordinary opening scene might suggest that. This movie Zuckerberg gets no social cues. It’s ironic that he creates the social network for the internet age.

A couple of things to note: Sorkin makes a very funny cameo in the film. And Barry Livingston, Ernie from “My Three Sons,” has one at the movie’s start. It’s always nice to see him. The music is terrific, as I noted on Friday, and the Beatles’ “Baby You’re a Rich Man” is the only song that could end this story. The film is going to be a big hit. there’s no doubt about it. I expect Sorkin to get writing awards.  Fincher will get his kudos for directing. All three lead actors are mesmerizing. Together this group has made the story of a website’s birth come to life vividly. It’s no easy task. They’ve done it with a jolt.