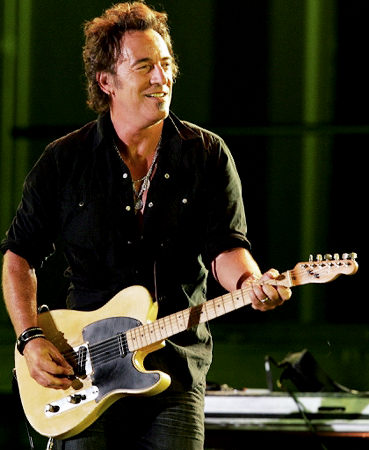 Bruce Springsteen is a rock star. And he got the rock star treatment last night at the Toronto Film Festival for a DVD release-non fiction film called “The Promise” about the making of his 1978 album “Darkness on the Edge of Town.”

Roy Thomson Hall added extra security I was told because they were so overwhelmed with photographers and autograph hounds. Everyone wanted a piece of Bruce.

Backstage tensions ran high. The Green Room, usually an open place where friends of the filmmakers pop in to wish good luck, was closed for the first time maybe ever. There was a lot of talking in headsets. A lot of grim faces. It was a total change from an hour before when Oscar winner Helen Mirren, director John Madden and friends came in to present their taut new thriller, “The Debt.”

In the end, Bruce, wife Patti, and managers didn’t really use the Green Room at all. Their very small entourage came and left quickly.

Before the 85 minute video played, Bruce took the stage, thanked the crowd, and joked about the night being an opportunity to win a Cadillac.

“The Promise” is a vanity production but proves to be more candid than you might think. It covers the period directly following the release of “Born to Run” in 1975, when Springsteen divorced original manager Mike Appel and brought in Rolling Stone writer Jon Landau as his manager. Major lawsuits followed, and Springsteen was unable to record for two years. The story of the break up and the lawsuit takes up a big section of the film, and it’s fascinating.

When he’s finally able to start making records again, Springsteen doesn’t want to make “Born to Run 2.” His plan, as he says, is to make history. Steve van Zandt notes that only eight or nine songs were written for “Born to Run” but 70 were completed for “Darkness.” Most of them didn’t make it. Two of them–the two best pop songs–“Because the Night” and “Fire”–were given to others–Patti Smith and the Pointer Sisters. There’s a nice moment with Smith where she explains how she got her “only hit.”

Some of the songs went to E Street satellite band Southside Johnny and the Asbury Jukes. There’s a great archival film of Springsteen and van Zandt performing a song that was given away, called “Talk to Me.” It’s one of the highlights of the many never before seen filmed pieces from that era.

Springsteen shows off his dozens of notebooks and explains his writing habits. There’s some clever insight into his writing process and how the band used to take bets on how long songs would be, or if they would make it onto the album. It’s the most self-effacing Springsteen has ever been.

Mostly what you get though is that he’s an artist. In 1978 he was coming to the end of the rock musician as artist, someone who crafted an album–not a single–because “it was the highest form of what could be done in rock”– I think Landau said that. These people were striving for something that would be important and would last. This concept must seem quaint to today’s prepackaged, fleeting, one hit wonder MTV/VMA stars.