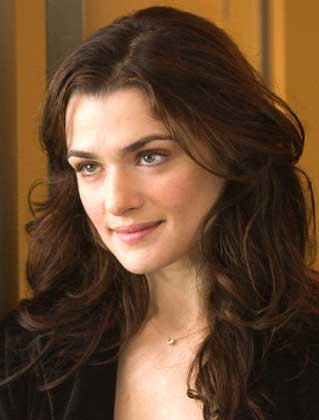 By the time I finished watching Rachel Weisz in her new thriller, “The Whistleblower,” I wanted all my money back from those UNICEF cartons.

This exciting film debuted at Toronto on Monday afternoon and I mean, it really got wild cheers and people going crazy at the end to meet Weisz, the filmmaker, and the woman upon whose experiences the film was based.

Larysa Kondracki has made a film certainly inspired by and as good as “Silkwood,” “Erin Brockovich,” “Norma Rae” or “Klute.”

Weisz–in a non-stop, gripping performance– plays Kathy Bolkovac, a Nebraska cop who went to Bosnia as part of a peacekeeping team and wound up the head of the UN’s Gender Relations division there.

Bolkovac uncovered a massive human trafficking scandal involving the UN and a frightening real life company called DynCorp http://en.wikipedia.org/wiki/DynCorp in Bosnia. When she went public she was threatened, fired, harrassed.

She lives in the Netherlands now, and has been essentially blacklisted from working in international positions.

The depiction of what DynCorp employees in Bosnia allegedly did to young women who’d been (again, allegedly) kidnapped or bought by them for sex was so intense that a woman at yesterday afternoon’s screening left the theater and immediately fainted out front.

The movie is that intense.

For Weisz, the screening seemed overwhelming, too. It was the first time she’d seen the movie, and experienced the incredible audience reaction.

Somehow, Rachel told me, she managed to put playing Kathy away at the end of the day and go home without nightmares. She and husband, director Darren Aronofsky, who has “Black Swan” here, have a child. They can’t bring Hollywood home.

Still, the whole Bolkovac saga is quite shocking. She told me at yesterday’s screening that the UN–yes, the United Nations–whom she worked for and represented–has never commented on what happened to her. So she’s written a book, also called “The Whistleblower,” that will be published in January.

If Bolkovac’s book is just a fraction of exciting as the movie, her story should be a big deal this winter.

Meantime, do read that Wikipedia entry on DynCorp. It will blow your mind.