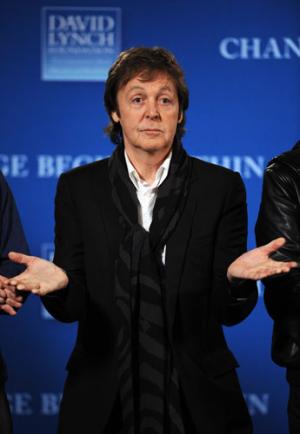 Is Oprah as big as the Beatles? The Kennedy Center seems to think so. They’ve just announced their awards for this December, and the two big names are Paul McCartney and Oprah Winfrey.

Oprah, of course, gets this as part of her year long winner’s lap. Her show ends its run in May.

McCartney’s award is a long time coming. None of the Beatles are in the Kennedy Center. Obviously, John Lennon and George Harrison, sadly cannot be inducted. McCartney’s award represents his work and the work of the group, frankly. And this is his year for big honors. He was at the White House last spring to pick up the Gershwin Prize.

Ironically, it was Herman’s hit song, “Hello Dolly!”–as recorded by Louis Armstrong–that fought the Beatles for the number 1 spot on the charts in 1964.  It would be very funny if producer George Stevens, Jr. got McCartney to sing “Hello Dolly!” at the show.

The Kennedy Center opted for no Hollywood names this year. Among some that were bandied about were Meryl Streep and George Lucas. Michael Douglas might have been a cool choice considering his illness, and that he’s having a banner year with “Wall Street 2” and “Solitary Man.”

In music, some fans were hopeful of an award for Jerry Leiber and Mike Stoller, the legendary songwriting team. This is their 60 th anniversary. But there’s always next year.