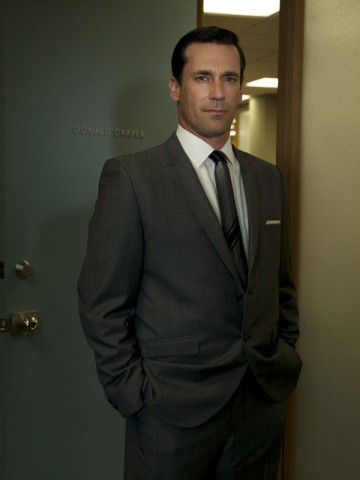 “Mad Men” — episode titled “The Suitcase” and written just by Matt Weiner was a winner and a return to form. A nearly all Don and Peggy episode, “The Suitcase”–Samsonite, for which the gang is trying to come up with an ad–is full of secrets (product placement?–urggggh). Don and Peggy shared secrets from the beginning, principally the one about her pregnancy. And tonight, Weiner decided to reconnect these two characters. Nicely done.

Mentions of New York places: The Palm (now a chain, and please don’t tell me that was product placement, too), The Forum of the Twelve Caesars, and Keane’s. The former was born the same year as this reporter and closed when I was 18. The latter is still in business on West 36th St., believe it or not, and as good as ever. I’m still waiting for a reference to Henry Stampler’s Filet Mignon, on Central Park West, and Elaine’s.

The Cassius Clay-Sonny Liston fight was a nice touch, too.

But it was all about Peggy’s story with Pete, the appearance again of his pregnant wife, and their secret of the baby that was given away.

At the same time, Don breaks down in tears at the news of Anna’s death. Jon Hamm got some good Emmy worth scenes in with a little drama. I liked his boxing routine.

First scene: Harry, who used the word “goniff” a couple of weeks ago, now making “Jew” jokes. This is why Roger’s wife’s cousin, Danny, was introduced–counterbalance to what now seems to be the underlying anti-Semitism. Rich Sommer sort of warned us about this last week at the Emmys. It’s getting ugly.

A major theme, though, is the alcoholism: Freddie’s return, Duck’s return, and now Don tossing his cookies violently. Only Roger Sterling’s jolly handling of the drink is kind of a sad comic effort to make it seem like nothing bad is happening. I just don’t want to see Don in AA. Not Don.