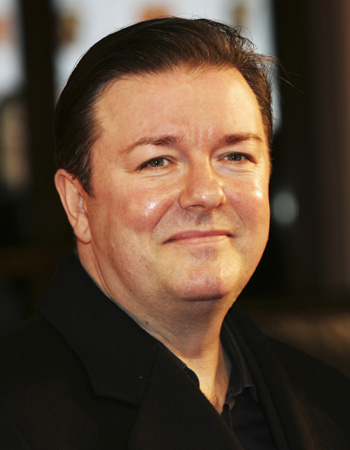 The British comic and creator of “The Office” has a lot of plans for the Golden Globes when he hosts them again in January.

Gervais is well aware of the terrible reputation of the Hollywood Foreign Press Association and doesn’t mind saying so on national television.

This past year, he took a fair number of swipes at them during the show. HFPA members are currently starting their annual swag tour, traveling from Venice to Telluride to Toronto and more on the studios’ money, all to see films they could see at home in Los Angeles. The HFPA mostly pays its own airfare from the $6 million a year NBC broadcast deal. Everything else is taken care of by the studios. They even get chauffeured around the various towns. Their feet don’t touch the ground!

Gervais took a small swipe at them at the Emmy Awards. He also won my heart with a acerbic aside about Mel Gibson. “He’s been through a lot” Gervais said, then took a beat. “Not as much as the Jews.” Then he served beer to the actors in the front of the Nokia Theater. I love him.

I ran into Ricky at the Four Seasons in West Hollywood before the Emmy Awards. He was just coming in from, believe it or not, a run. He’s getting into shape for those Globes.

Meantime, I do hear the infighting at the HFPA continues unabated. And there’s a rumor going around that the HFPA wants to leave the Beverly Hilton Hotel for somewhere closer to the Oscars’ Kodak Theater. That would be a mistake. The BHH has put up with a lot from the group, and done just about everything for them including giving the members who can still drive free parking all year.

“The HFPA always feels like it’s being ripped off by everyone,” says a source.