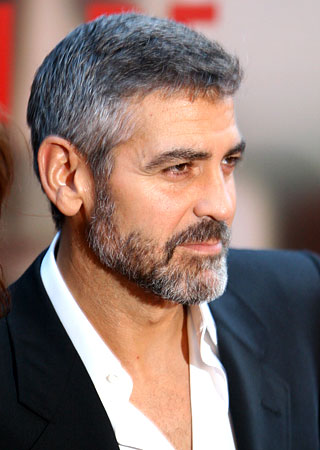 George Clooney opens on Wednesday in “The American,”  a movie that almost nothing has been known about. The buzz was that it was bad, and that Focus Features was dumping it. The film had no US premiere, no press junket, and George isn’t attending its screening in Venice.

So what gives? We saw “The American,” directed by Anton Corbijn, on Monday night at long last. I mean, who screens a movie 48 hours before it’s supposed to open? So many weird things about this release, including the fact that the press notes omit entirely any mention of one of the five main players, actor Johan Leysen. I don’t get it.

And yet, it turns out “The American”–which should be called “Mr. Butterfly”–is a terrific, dark, semi-indie release. Clooney gives one of his best performances as a moody, nearly silent hit man who’s on the run in Italy from mysterious enemies. The title may refer to the fact that Clooney is the only American in the film, and the only recognizable face.

But some things–many things–are different about George Clooney in this film. This movie is a hard R rating, and not just for its violence. It is also unashamedly sexy. I can’t recall seeing George Clooney in a real sex scene before, and he’s been to the gym in anticipation of it. Luckily, his co-star, Violante Placido, is more than up to the challenge. She is a spectacular, and often naked, beauty audiences are not likely to forget any time soon.

Corbijn won raves previously with his film, “Control,” about the rock group Joy Division. In “The American,” he’s done just as well if not better creating a moody, dark film that moves slowly with purpose and is as at the same time just riveting. Corbijn is all about style but that doesn’t mean there isn’t plenty of substance, too.

Using Italian villages as his backdrop, he’s quoting heavily from Sergio Leone. In fact, Clooney’s Jack reminded me a lot of Clint Eastwood’s early gunslingers. The villages are as remote, lonely and scary as wild west towns in Corbijn’s creation.

I really thought Clooney’s work here puts him in line for an Oscar nomination along with Michael Douglas from “Solitary Man,” Ryan Gosling in “Blue Valentine,” and Leonardo Di Caprio from “Inception” and “Shutter Island.” And Corbijn has made a movie I will recommend to anyone who asks over this Labor Day weekend: “What should we see?” See “The American.”