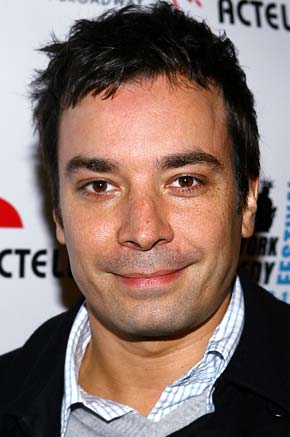 I don’t know what the Emmy Awards looked like on TV, but in the Nokia Theater, it was a hit.

Jimmy Fallon brought youth and freshness to the proceedings. He was the best host in recent memory, giving the show a much needed personality. From his opening musical number with the cast of “Glee” to his musical category dividers, Fallon — with his guitar and unabashed courage–was in command. Everyone will gripe about something on Monday morning, but Jimmy rocked the Emmys. I say have him back next year.

And the Emmys are not easy–George Clooney provided the only glimmer of glamour all night. Otherwise, the Emmy show is a turgid affair. Here’s something; in the Nokia, during the breaks, the orchestra played mournful classical violin sonatas. It sounded like a funeral. So weird. It was only when Fallon took the stage back that the audience came alive. Who knows what was going on.

Also, the show is hampered in the theater becausde someone made the decision not to show the acceptance speeches on the big video screens. So the winners were hard to see or understand, leading to lackluster applause within the room. At the end of the show, 3500 people were told that they had come to the front left corner of the theater and enter the Governor’s Ball through a tiny door. It was insanity.

There were several upsets. None of the “Mad Men” actors won anything, yet the show won Best Writing and Best Drama. Go figure.

Jewel screeched through the In Memoriam section with a song I never want to hear again. And the producers foolishly snubbed the deaths of great TV actors who died this year– Helen Wagner, James Mitchell, and Frances Reid, all soap legends who’d been on TV as long as the medium has existed. It was lame.

Other anomalies: Steve Carell being snubbed for the kid from “Big Bang Theory.” No Charlie Sheen either. And where were people like Courteney Cox and Jeremy Piven?

Nevertheless, four star kudos to Jimmy Fallon, who celebrated into the wee hours at club Trousdale with his sensational producer wife Nancy Juvonen and a few close pals like Susan Sarandon, Matthew Fox, Drew Barrymore–who danced up a storm with Bill Maher; Claire Danes and Hugh Dancy; Seal and Heidi Klum; Michael C. Hall, Karen Duffy, and a gaggle of “SNL” friends like Lorne Michaels, Amy Poehler, Seth Meyers, and Ana Gasteyer. The music was R&B and the menu was Inn and Out Burgers. It was a night to remember and one that won’t be forgotten.