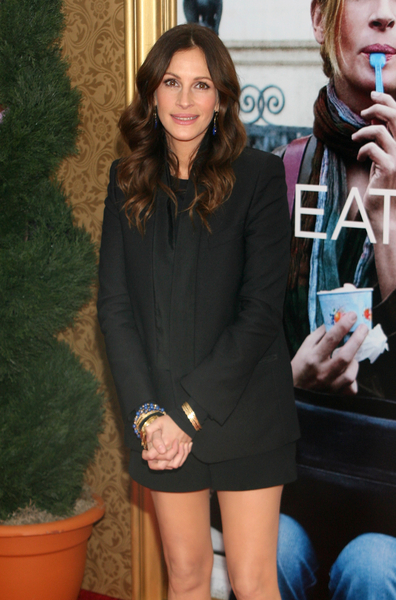 This means that no one at all saw the movie before Tuesday night’s premiere. On top of that, critics and media outlets are really only seeing it for the first time tonight–Wednesday–two days before it opens on the unlucky Friday the 13th.

All reviews are embargoed until Friday, but with the internet it’s hard to control. There are no reviews on Rottentomatoes.com right now, which is a little weird with 48 hours to go.

However: one review has been posted on the Internet Movie Database. The reviewer gave it a 2 out of 10.

Meanwhile, it’s interesting to note that the press junket for the movie was held in the Napa Valley in northern California. No part of the movie is set there. But maybe someone thought it mimicked Italy, one of the foreign locales featured in film.

This means we’ll be seeing the usual suck-ups from Napa with “Entertainment Tonight” drooling all over the place. Columbia Pictures will have footed the bill.

“The cast and crew of Eat, Pray, Love, the upcoming film based on the memoir of the same name written by Elizabeth Gilbert, spent this past week wrapping up their press junkets in Napa Valley, and numerous California wines were on hand for the celebrations. Both the press junket and the after-party were held in Napa at the foot of Mount St. Jean at the estate of John and Barbara Witt. The Witts were thrilled to host the stars of the foodie film and pulled from their cellars some bottles of the Witt Estate Repartie Merlot 2004 made with grapes from their 6-acre vineyard. The events at the rustic modern rammed-earth estate were organized by Napa-based location and production company Scout Napa Valley, which tapped numerous California wineries to provide the libations.

“Our West Coast spies tell us the stars in attendance—Julia Roberts, Javier Bardem, Billy Crudup, Richard Jenkins and director Ryan Murphy—were treated to [a selection of very expensive wines and champagnes].” Sounds like a great way to get everyone in the mood for the movie!

So many people at last night’s premiere told me that the movie would be a hit because it had a built in following among the book’s readers. But I caution those people. Books like “Midnight in the Garden of Good and Evil” and “White Oleander” also had devout readers. The movies were bad, and the box office was a bust. Nothing can be taken for granted in these situations. A movie must stand on its own.