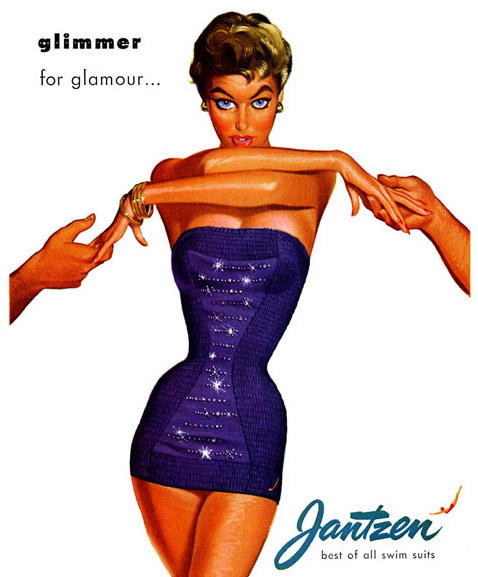 In Sunday’s season premiere of “Mad Men,” the Sterling Cooper boys pitch their ideas to the people who own Jantzen swimwear. This “family company” from Portland, Oregon was founded in 1910 and still exists in the same building where it was born, believe it or not!

And that’s the problem: in the show, the man who seems to be playing Carl Jantzen, is kind of a conservative hick who puts his feet up on the coffee table in the Sterling Cooper office. He refuses to allow the word “bikini” but prefers the term “two piece bathing suit.” Don Draper (Jon Hamm), of course, doesn’t like this at all. After all, Brian Hyland‘s hit record, “Itsy Bitsy Teenie Weenie Yellow Polka Dot Bikini” had already been a hit four years earlier, in 1960. He wants to sell sex. The Jantzens want to sell bathing suits.

I checked out the website for Jantzen. You should, too. Compared to the world of Victoria’s Secret, the Jantzen swimsuits are pretty, but they look like something from the…1920s. Jantzen favors one piece suits, no thongs (god forbid), and very little in the way of sexy. They’re practical bathing suits! I do believe Portland is landlocked. California beaches must seem so decadent!