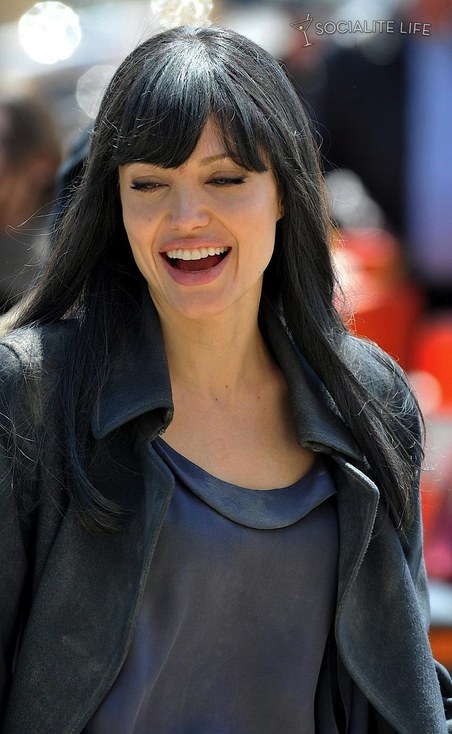 Where do we begin with a movie that makes no sense whatsoever and has a great actor–Andre Braugher–reciting half a line in a quarter of a scene buried toward its end?

This is “Salt,” and you can take it with a grain of. Angelina Jolie deserves a lot of credit because if she hadn’t played rogue CIA agent Evelyn Salt–a role originally intended for Tom Cruise—Philip Noyce‘s action thriller would really be bonkers. As it is, if you follow Angie, you’re in good shape. Her Salt–named Edwin in the Cruise version that wasn’t made–is Batman, Wonder Woman, and Spider Man all rolled into one. She’s a cartoon character in a cartoon movie.

Salt is blissfully short in length and coherence. Liev Schreiber, who’s such a good theater actor, has an implacable look on his face that says: Something has to pay for all those Hamlet and Arthur Miller stuff on Broadway. Chiewetel Eijofor maintains his cool, but also seems to be thinking, “This will pay the mortgage.”

As for director Noyce, he has a long, impressive record of good films. “The Quiet American” is his gem, but he also has “Clear and Present Danger,” “Dead Calm,” and “Rabbit Proof Fence” on his resume.

“Salt” has lots of explosions and set action pieces, all of which are pure visceral entertainment. Some of them, though, are just laughable given the circumstances. Angie’s big escape scene near the start of the film is almost like a parody of a Tom Cruise movie. She leaps from a bridge to a truck to an oil tanker, all of them in motion, with nary a scrape. It’s hilarious. It’s like the “Batman” TV show. You almost expect to see a big colorful Pow! or Splat! on the screen.

Most of “Salt” is an on-the-run formula pic about a CIA agent (Jolie) who might be good or bad, we don’t know. Then, since it’s already a mindless blur, it becomes “Fail Safe.” We have 30 seconds to stop the launching of deadly missiles to Russia! The movie jumps a shark and a couple of dolphins.

Then, to add insult to injury, the camera pans across Andre Braugher. Is he just sitting in the command center by accident? He has no character or role. He might be playing a desk lamp. He has grey hair. We gasp. We weep. His name is buried in the credits. Well, everyone needs to keep their SAG health insurance active, I guess.

Should you stick to a “Salt”-free diet? It’s a popcorn film, and the air conditioning is worth it. Also watch the scene where Angie is trying to shoot her way through a door. She keeps pulling out gun after gun, each succeeding one getting bigger and bigger. It’s like a scene from Bugs Bunny. It’s fun. Everyone claps. People talk back to the screen. It’s summer.

Looking forward to the sequel, “Pepper.”