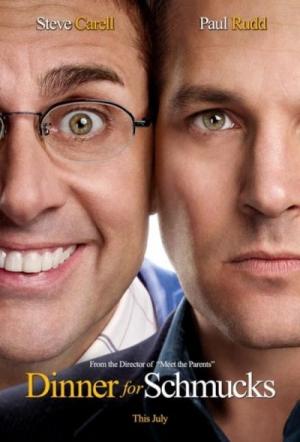 Steve Carell is so startlingly good in Jay Roach‘s hilarious “Dinner for Schmucks” you can see why he’s ready to leave “The Office.”

“I do think it’s time,” Carell told me last night at the Schmucks party at the aka Boom Boom Room atop the Standard Hotel. The cool event followed a socko premiere screening at the Ziegfeld. He’s right, too: better to leave on top.

After seeing “Shmucks,” you know it’s time for Carell to leave “The Office” to others. He’s a movie star.

In the film, he plays a kind of savant who makes dioramas using dead mice in costumes. This is considered so weird,and his character is so odd, that Paul Rudd wants to bring him to a dinner for idiots his boss (the as usual terrific Bruce Greenwood) organizes for the upper echelon of his company. Everyone has to bring a fascinating idiot whom the diners can mock.

If this sounds like an odd premise, it is: the first 20 minutes of the movie, including the setup, are funny but weird. And then Roach settles down to tell what is really a story with a lot of heart and soul. And laughs, Lots of laughs. When you realize Carell’s Barry is no idiot at all, the film kicks in. Carell’s performance is his most nuanced ever.

I told him Barry reminded me a little of Jerry Lewis from his early films.

“Jerry Lewis?” he countered. “I didn’t know I was channeling him!”

And what of “Get Smart”? Will we ever see a sequel to the movie he made with Anne Hathaway? “It’s written,” he said, “I think it’s just a matter of finding time to do it.” And that’s why he’s leaving “The Office” next May.

And isn’t this ironic? Back in June, a movie blog said the buzz about “Dinner” was that it “wasn’t working.” And here’s the movie, a very, very funny, well executed comedy that totally works and should be a substantial hit. Jay Roach has fashioned something disarmingly humorous and substantial from the screenplay by David Guion and Michael Handelman.

Everyone in it–from Lucy Punch to Paul Rudd and Zack Galifinakis–makes a big contribution. Jemaine Clement, late of HBO’s “Flight of the Conchords,” is a droll villain who recalls Alexander Godunov’s silly playboy from “The Money Pit.”