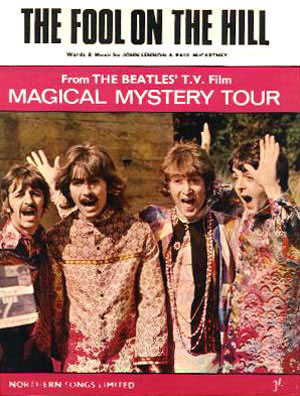 The Beatles rarely if ever give permission for their records to be used in movies. Sometimes they allow the songs to be covered by other artists. But it’s a given that the answer is ‘no’ when a film producer asks for a Beatles record to be part of his or her soundtrack.

Well, this week there’s an exception. The Beatles have allowed their classic, “Fool on the Hill,” to be used as the song over the opening credits in Jay Roach‘s “Dinner for Schmucks.” I am told by inside sources that Paramount/Dreamworks paid $1.5 million to buy out the rights in perpetuity. That is a staggering amount of money to pay for one song in a film.

It didn’t hurt that “Schmucks” comes from Dreamworks, which means Spielberg, who is Paul McCartney’s neighbor in the Hamptons. Also, producer Walter Parkes says that both McCartney and Yoko One saw and liked the movie. Ono also allowed the lyrics to “Imagine” by her late husband, John Lennon, to be used. For a price.

In the past, the Beatles have not allowed the use of their records in many films. When Wes Anderson wanted “Hey Jude” and “I’m Looking Through You” for “The Royal Tennenbaums,” he put them in the version that was shown at the opening of the New York Film Festival. Subsequently he had to remove the recordings and substitute them with instrumental versions made by Mark Mothersbaugh.

Coincidentally, director Jay Roach’s wife, singer Susanna Hoffs of the Bangles, has recorded one Beatle song herself: “Got to You Get You into My Life,” with Matthew Sweet.

You may wonder why no Beatles recordings have ever made it into movies. The late great Neil Aspinall, who ran the Beatles’ Apple Corps for almost 40 years, was adamant that the Fab Four’s identity was never diluted or demeaned by being pushed into rush of other media. He was right, too. By keeping the Beatles above the fray, Aspinall put them in a class of their own. So “Schmucks” will likely be the last movie t0 allow such a thing for a long time.