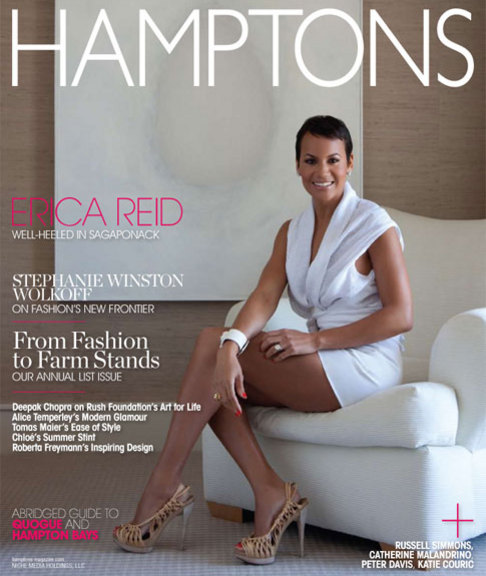 Here’s another Hamptons report. Yes, it’s still buzzing out there, although I’m taking two weeks off for a reality charge.

Sunday afternoon, publishing magnate and hardest working man in the business Jason Binn brought the A List to Montauk. This year, everyone’s interested in Montauk. The Crow’s Nest is the place to be seen, and now Jason took over the Montauk Yacht Club for a Hamptons Magazine clambake. I saw Kyle Maclachlan and Star Jones (with her Maltese), and plenty of local celebs including the guys who run the suddenly hot Panoramic View hotel. The Yacht Club never looked better and there was lobster everywhere–too much lobster! Who ever heard of that? The party was so chi-chi that it was sponsored by Manhattan Motorcars. They brought a bunch of $9 million cars including a convertible Rolls Royce the size of a tank. The leather on the seats was like buttah.

On Saturday night, Nick and Toni’s was hopping: The Queen of Soul Miss Aretha Franklin had a table on the patio, right next to Howard Stern. Steven Spielberg was in there last week. Earlier, Miss Franklin stopped by the 85th birthday party for director DA Pennebaker over near the Maidstone Country Club.

And everywhere else there was action: Lou Reed eating at Phillippe Chow, and some “Real Housewives” over at the Social Life party. The hot place to eat that’s not Nick and Toni’s? Tutto Il Giorno in Sag Harbor. Billy Joel is a regular, and no one can get a reservation. Gabby Karan, Donna’s daughter, is the backer. Mom Donna Karan‘s Urban Zen store is next door. Mauricio Marfolgia is the executive chef and man about town who’s making a name for himself.