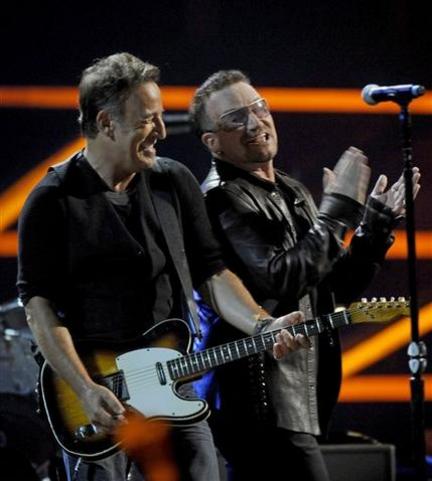 I’m usually pretty critical of the Rock Hall, but I’ll let that pass this time. The performances were so good, especially from the first night, that it’s worth enjoying them.

Of course I am particularly partial to Bruce Springsteen’s extended set with “Soul Man” Sam Moore, Billy Joel, John Fogerty, Tom Morello and  Darlene Love, and the E Street Band. The YouTube video is attached below. And don’t miss the big finale with all those guys doing Jackie Wilson’s “Higher and Higher.” It was the crowning moment of the two night event.

There’s not enough Aretha for my taste, but plenty of Stevie Wonder, who was grand. And Sting‘s session with Jeff Beck on Curtis Mayfield‘s often copied “People Get Ready” (hello John Mayer!) is top notch. There’s waay too much Metallica and U2, however. There are plenty of artists missing– Paul McCartney and Ringo Starr skipped the show, Eric Clapton got sick, The Who were nowhere to be found, Keith Richards declined– but it is what it is. We can enjoy these performances without betraying our basic displeasure with the Rock Hall.