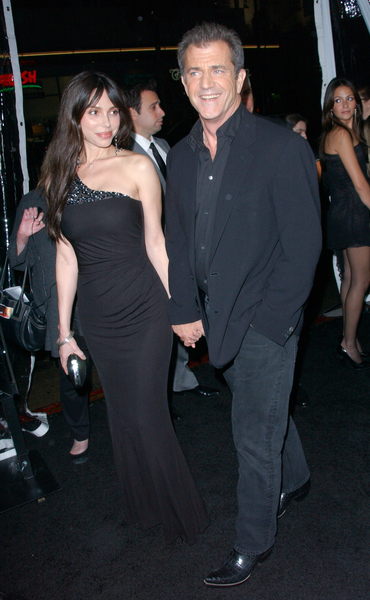 You have to hand it to Oksana Grigorieva. She played Mel Gibson as if she were Itzhak Perlman on the violin.

Of course, Perlman is Jewish, so Mel wouldn’t like that.

But Oksana’s daily release of Mel’s horrid tapes has pretty much destroyed him. And though he deserves it, not all is what it seems.

For one thing, these taped conversations supposedly took place on January 6, 2010. And yet, there’s Oksana walking the red carpet with Gibson 20 days later for the premiere of “Edge of Darkness.” If she hated him so much, why did she go? Was he pointing a gun to her head? (Maybe, considering the tapes.) The picture accompanying this article was taken that night. You’d think someone who’d been threatened with a gun, hit in the face, had her teeth knocked, child threatened, been called vile names, wouldn’t have put on a gown three weeks later and done a red carpet.

And then again: Oksana accompanied Mel to Eric Mika‘s Hollywood Reporter party two nights before the Oscars. That was on March 5th, two months after Oksana made her tapes. Of course, she and Gibson arrived looking like hell. The pictures from the party don’t do justice to their appearance–as if they’d just awakened after being on a bender. THR’s Elizabeth Guider and I were standing just a few feet from them when this weird couple arrived. They couldn’t have looked worse. But they were together.

A source close to Gibson also tells me that Oksana insisted on going with Mel on his European promo tour of “Edge.” That was all in the time between January 26th and the Oscars. It’s possible that when the Oscar hoopla was over, Oksana decided to make a break for it. But she sure enjoyed the spotlight while she was getting ready.

None of this, of course, excuses Gibson from all the terrible things he’s said and done. Let’s not forget that. It’s just a perfect storm.