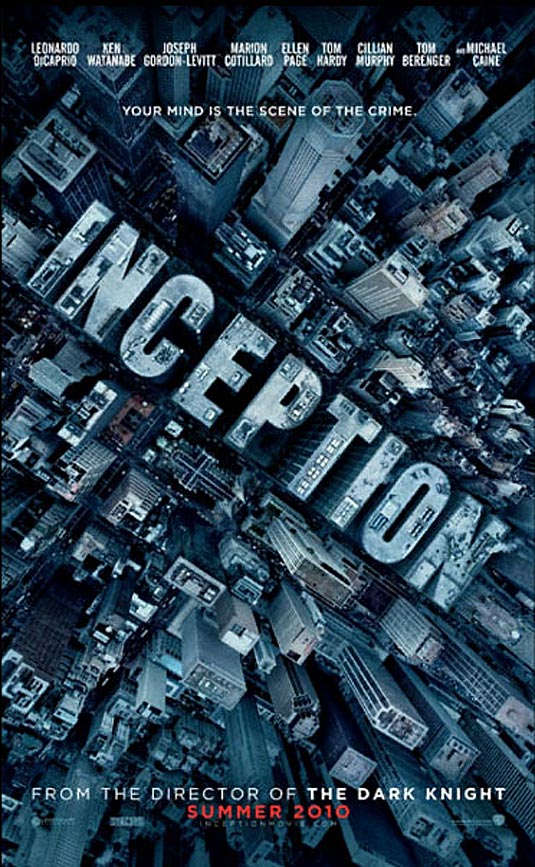 “Is it okay to like a film but not really understand it?”

That’s what someone asked yesterday after the afternoon screening of Chris Nolan‘s “Inception.”

The answer is yes, of course. And “Inception” is a movie you will have to see at least twice. It’s “Memento” meets Kubrick, and not easy to navigate under the best of circumstances. But this much is clear: “Inception,” which evolves at one point into three simultaneous films, is gorgeous, provocative, and mesmerizing. Does it make sense? Hard to say. Is it fascinating to watch? Definitely. You will leave the theater totally captivate and throttled by it.

First of all, it’s a film with a lot of inside jokes. Here are a couple: in the first 20 minutes, which are really nuts, Leonardo DiCaprio‘s Cobb propels out a window on a bungee cord and then repels up the side of the building. I am not sure whether this is intentional, but the whole sequence looks like it’s borrowed from the “Batman” TV series of the 1960s. Nolan, of course, directed the hit film, “Batman Begins.”

The plot of “Inception” also involves something that looks like what Michael Jackson used to do with Propofol. Leo and co. knock people out with IV drugs, then explore their subconscious. It’s about dreams, and their layers. “Avatar” looks like it was made with Crayolas compared to the oil painting going on in “Inception.” Talk about 3D–the characters in “Inception” are constantly diving three dreams deep into consciousness to untangle their problems.

Early reviews of “Inception” called it genius. Then the backlash started, with some weekly reviewers ready to pounce all over it. I have to say, during the first 20 minute sequence, “Inception” requires more attention than any other film of the last 20 years. More even than “Memento,” Nolan’s masterwork. Like “Memento,” “Inception” is a puzzle, and needs time to ponder before solving. It gets so involved and complex that when Ellen Page asks DiCaprio for a plot recap–“Wait? Whose subconscious are going into?”–that the audience breaks out in a knowing laugh.

Set aside the plot, and the story for a minute: there is much glorious staging and cinematography here, it’s more than you can expect in any sci-fi thriller. The two best sequences: one in which Gordon-Levitt shepherds a bunch of sleeping characters through weightlessness is just mind blowing. And you will love it the first time DiCaprio shows Page how to manipulate the architecture of her dreams, and she turns a city block upside down.

I hope after Friday there’s lots of discussion here about “Inception.” Add it to a list with “Shutter Island” and “The Ghost Writer” for the best films so far of 2010. It’s also the only interesting film of this summer. Get set to leave your local theater rattled. But in a good way.