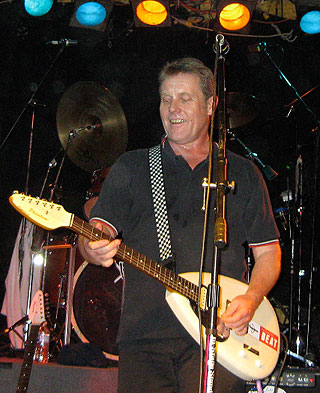 Are the Hamptons still hot? Oh yes, indeed. So hot that I actually missed Denise Rich‘s cocktail party to celebrate her coming fall extravaganza for her Gabrielle’s Angels Ball. (Denise, we’ll be there in October.) The reason? The sudden booking of the great UK 80s band The English Beat at Stephen Talkhouse in Amagansett. Dave Wakeling, founder of The Beat (they were renamed such because an American group beat them to the name), wrote some of the catchiest and most alluring pop-reggae records of the early 80s. When The E. Beat broke up, they splintered into General Public and the Fine Young Cannibals. And then they all drifted away.

On Friday, Wakeling brought his current line up to Amagansett’s famous Talkhouse, a dive with a long, wide stage under a low ceiling. Even though the 9pm temperature was well beyond 80 degrees inside and out, the place was jammed with devoted Wakeling fans who knew every word to the Birmingham Brit’s classics like the extraordinary “Save it for Later” and “Tenderness.” Wakeling is 54 now; I saw him play in 1982 at the Country Club in Reseda, California. He hasn’t lost a “beat,” frankly. Known for his marathon shows, Wakeling kept this one to just a little over two hours. He could have gone on forever.

And oh yes, “Save it for Later”–I can die now, having heard this version, and a whole room of people who didn’t know each other sing this tune loudly and ebulliently. All of Wakeling’s songs are infectious and beautifully constructed, from “Mirror in the Bathroom” to “Tenderness.” But “Save it for Later” is his epic. John Cusack, another rabid fan, made sure to include it in his most recent film.

What kind of guy is Wakeling? I told him before the show that I might have to leave early, and so inquired when “Save it” came in the set. “At the end,” he said, “but I can move it up if you like.” He did–have you heard of such a thing? But the show was so good I had to stay to the triumphant end. The English Beat keeps touring America all summer with Squeeze on some dates, and Bad Manners on others. See them, and understand why the current state of music is so synthetic and dead.