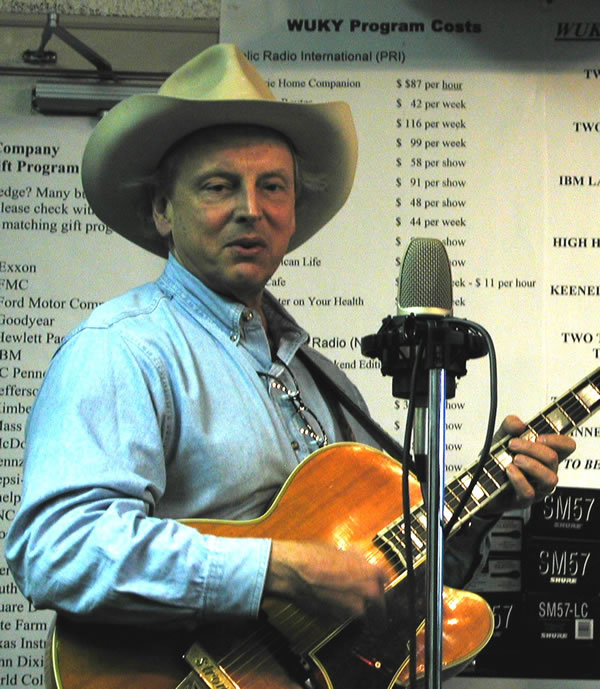 It was a beautiful night to be outdoors in Manhattan Thursday, cool and comfortable–except one music fan at the third night’s installment of this year’s Midsummer Night Swing series in Lincoln Center’s Damrosch Park was afraid of an inevitable confrontation.

“We missed you at the Station Inn,” said Terry Choate, owner of Nashville’s Crosswind Corporation and manager of the night’s star performers, Nashville swing band the Time Jumpers. Sure enough, Ranger Doug, guitarist/vocalist of Riders In the Sky and “Idol of American Youth,” had put me on the list for the TJs regular Monday night show at Nashville’s famed Station Inn bluegrass club. I’d palled around with the Riders–America’s premier cowboy country-and-western band–for three days last month at the Grand Ol’ Opry and the CMA Music Festival, and Ranger Doug wanted me to see the esteemed band of Nashville players who have coalesced into the Time Jumpers as a celebrated side band.

After explaining that I had lost my glasses before driving over to Allison Krauss‘s for dinner and wimped out of driving downtown to the Station at night wearing dark prescription shades, Ranger Doug gave me the rundown on this rare out-of-town Time Jumpers gig.

“We’ve only done about 10 road dates, because it’s hard to get a quorum,” said Ranger Doug. “You have to be a certain number to be the Time Jumpers–eight, to be proper. Otherwise it’s just a jam band and not the Time Jumpers anymore.”

The group was originally formed 13 years ago when founding members started jamming on swing music in the Grand Ole Opry dressing rooms. It now attracts top Nashville stars like Toby Keith, Jimmy Buffett, Reba McEntire and John Rich, who come down to sit in at the Monday night gigs.

It was only the second Time Jumpers road date for Ranger Doug, who just completed Riders in the Sky performance No. 5,962. I hadn’t seen the group in New York since No. 5,354 show three years ago at the River to River Festival; Ethan Coen was there, prompting Ranger Doug to introduce “King of Country Fiddlers” Woody Paul as the star of the upcoming movie “O Brother, Where Am I”–the intro he’s used ever since.

No wonder Kenny looked familiar: I’d just seen him twice last month, too, at the Opry, as he also serves now in Cajun country star Jimmy C. Newman‘s band. With Spivey and Larry Franklin he gave the Time Jumpers a phenomenal three-fiddle front, with Larry Franklin and Reiss flanking on the right and Dawn Sears on the left; Ranger Doug sat back by Vanaugh except when he came out to sing lead on songs like Elton Britt‘s yodel showpiece “Give Me a Pinto Pal.”

Chanteuse Laura Cantrell deserves kudos for catching the Connie Smith quality in Dawn Sears‘ singing. I saw Smith in Nashville as well, at the Opry and at husband Marty Stuart‘s listening party for his fabulous forthcoming album “Ghost Train” (due Aug. 24); the Opry legend said she has a new album in the works as well.

For his part Choate—a former A&R exec at Capitol Nashville during the Garth Brooks era who now also works with Larry Gatlin (he produced his latest album “Pilgrimage”) — and Opry station WSM’s “Inside the Opry Circle” host Teea Goans (he produced her debut album, too), made note that the Time Jumpers will film a second DVD this fall, the first, “Jumpin’ Time” (2006), having garnered a Grammy nomination for “Sweet Memories.”

Of course the group performed the Mickey Newbury classic, along with others by the likes of Bob Wills, of course, Gene Autry, Ray Price, Faron Young, Vern Gosdin, George Strait and Andy Reiss, whose original instrumental “Stompin’ at the Station” left them stompin’ at the Lincoln.

Reiss and Ranger Doug, by the way, have recorded an acoustic jazz album, “Art of the Archtop.”

Old friend Robert Kenison was watching up close, being a fellow music legend. Better known as Troy Sharmel of the legendary 1970s Madison, Wis.-based rock ‘n’ roll show band Dr. Bop & The Headliners (and known to his friends as Beefy), Kenison joined me in heading north to Ashford & Simpson‘s Sugar Bar–after a 10-minute break to listen to two of the 60 Sing for Hope “Play Me, I’m Yours” pianos scattered about the city.

A young girl, maybe six and unable to reach the pedals, enchanted scores of exiting Midsummer Night Swingers and American Ballet Theater-goers from the adjacent Met Opera House at the piano situated outside Avery Fisher Hall. She remained pretty much oblivious to the crowd and its ecstatic applause and ran over to her mother and baby brothers before being coaxed into an encore.

Across the street at Alice Tully Hall, a young woman sang “Memories,” accompanied by a piano player skilled enough to switch to the “Habanera (‘L’amour est un oiseau rebelle’)” aria from “Carmen” when an older lady joined in and then requested it.