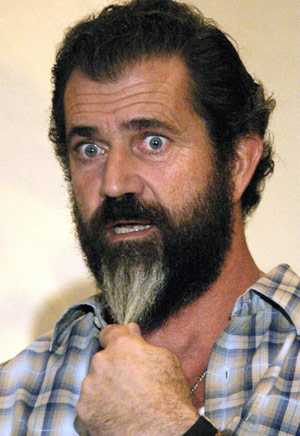 It’s a good thing Summit Entertainment is making so much money on the “Twilight” series.

They also have in their possession “The Beaver,” starring Mel Gibson, and directed by Jodie Foster.

After what’s happened now, “The Beaver” may not see the light of the day for a long, long time.

Gibson–already branded an anti-Semite and racist, as well as anti conventional Catholicism and the Pope–has now really finished himself off.

According to several reports, from TMZ to Radar Online, Gibson is heard on tape using the “N word” to his ex girlfriend and babymama, Oksana Grigorieva.

Not only does Gibson use the “N Word,” he’s also singularly abusive to Grigorieva, who recently bore him a child. This is the woman for whom he left his wife, Robyn, by the way.

The reports say Gibson told Oskana: “You’re an embarrassment to me.” He also says: “You look like a f***ing pig in heat, and if you get raped by a pack of n***ers, it will be your fault.”

Mel tells Oksana: “How dare you act like such a bitch when I have been so f**king nice.”  He adds:  “I am going to come and burn the f**king house down… but you will blow me first.”

OK, so that’s it. There’s more, but I’m sure one of the reliable tabloid websites will be broadcasting the whole fiasco soon. If it’s true–and it sure seems like it–Gibson is completely done in Hollywood. No amount of feigning apologies to Diane Sawyer can help him. Rehab is out of the question.

There’s simply no excuse for this behavior. But there was no excuse for him calling a female police officer, “Sugar tits,” or making his anti-Semitic observations to a Jewish cop in Malibu. Nor was there any rationale for his inappropriate behavior while promoting “Edge of Darkness” this past January.

Mel will be left to running his Holy Family Church in Malibu/Agoura Hills for Catholics who don’t recognize the pope and Holocaust deniers. If only the Academy could recall his Oscars for “Braveheart,” and offer them to Ron Howard for the real Best Picture of 1995, “Apollo 13.”

As for “The Beaver,” Gibson cannot possibly do any press now. And Foster would be left to answer embarrassing questions. That leaves the handpuppet beaver that Gibson’s character talks to in the movie. He will be available for Glenn Beck, if asked.

PS I will never forget Mel and Oksana showing up at the Hollywood Reporter pre-Oscar party this year. Mel  looked like he’d slept in his clothes; his eyes were barely in focus.

Mel was there to receive some cockamamie award from Mexico for shooting there, even though the people of the village where he was planning to make a movie didn’t want him there.