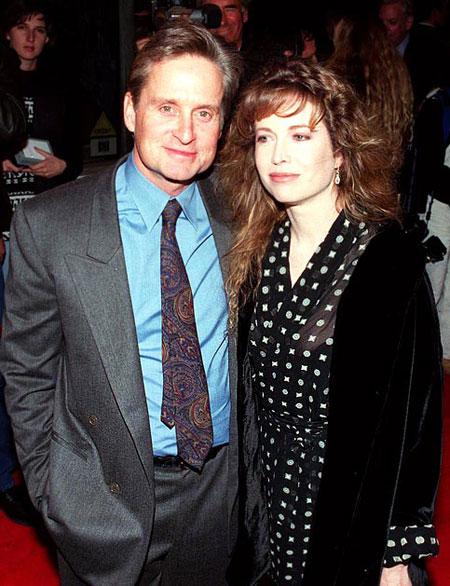 Everyone and anyone who’s read press reports about Michael Douglas‘s ex wife Diandra deMorrell Douglas Klein–and knows her situation–is wondering what the heck is going on. Diandra Douglas should be loaded.

In fact, this column has learned that her Diandra deMorrell Douglas Foundation–with assets of about $1.5 million–was possibly looted by now imprisoned money manager Ken Starr.

It was Starr who maintained Douglas’s foundation. Her sudden need for money from ex husband Michael Douglas–ten years after their divorce–suggests that Diandra is one of Starr’s many celebrity victims.

ADiandra, divorced from Michael for a decade, is now suing him to get money from “Wall Street 2.” She thinks she’s entitled to the money per her divorce agreement–that it’s a spin off from “Wall Street” and part of her original settlement. It’s ironic since “Wall Street” is all about greed. So is Ken Starr.

But Diandra is in trouble. According to public records obtained by this column, she has just over $600,000 in mechanics liens placed against her for work done on her posh East 65th St. townhouse. The biggest lien is held by a contracting firm for $465,428. It was filed last November 2009.

Diandra apparently has no concern over what such a lawsuit might do to her son, Cameron, currently in prison and trying to rebuild his life. At 31, he told the court that the last ten months in prison have been the first sober days of his life. It cannot have been easy to see his mother back on the front page of the New York tabloids. I’m sure it was a big hit in jail.

Diandra Douglas has a lot of real estate holdings, and, potentially, assets. Currently, the home she got in the inheritance– a massive estate in tony Montecito, California–is on the market for $29 million.

Her divorce settlement from Douglas–$45 million–was so large that Diandra, according to sources, didn’t want to remarry lest she lose anything. “She didn’t want to lose the Douglas name, that’s for sure,” says a source. In reality, Diandra Douglas is really now Diandra Klein. But I’m skipping ahead.

Indeed, Diandra–who married at age 20 and had Cameron at 21–has spent her post-Michael Douglas years on a tear. She almost married another very wealthy man named Zach Bacon, whose family sizzles with money, power and real estate in New York. They didn’t marry but did order up twin boys from a surrogate. Diandra sued over custody issues, and a contentious fight ensued. The boys live with Bacon, and Douglas visits them. In 2005, according to reports, she bought a townhouse on the Upper East Side for over $5 million. She recently sold it, reports say, for roughly $9 million.

Next stop was a marriage to guitar maker Michael Klein. At the time they met he was married to Roxanne Klein, Oprah Winfrey‘s raw food guru. Diandra and Klein married. Then she adopted a little girl from Kazakhstan with the help of her cousin-in-law Libet Johnson, of the Johnson & Johnson fortune. She used now imprisoned scam baby seller Orson Mozes–who stole millions from prospective adoptive parents and made false claims about having ready to go babies–to get the child.

Klein, perhaps distressed from the soap opera, went back to Roxanne. In between he and Diandra bought another townhouse, also on the Upper East Side, on the most prime block, for $15 million, where she continues to live to this day. It’s the same location where Cameron Douglas first went under house arrest last year–until authorities discovered that his girlfriend was smuggling heroin to him inside toothbrushes. Diandra, friends say, had no idea what was going on with Cameron under her own roof, where often three small children were also living.

If Douglas been significantly looted by Starr it puts her in good company–with Neil Simon, Uma Thurman, Carly Simon, former ICM chairman Jim Wiatt, and a host of other big names.