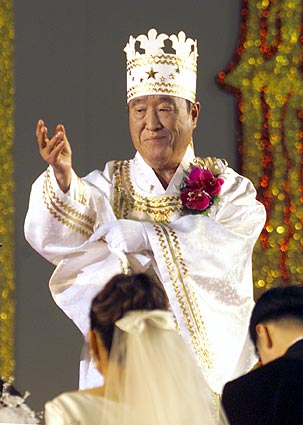 As usual, everyone has this wrong.

Michael Jackson‘s parents have been sued once again by a newspaper called the Segye Times in South Korea.

But the Segye Times is a front for Reverend Moon’s Unification Church. The church owns the paper, just the way they did the Washington Times.

This financial back and forth between the Moonies and the Jacksons has been going on since 1990. The Jacksons had not toured since the Victory Tour ended in 1984. Here’s what happened:

The Moonies wanted to underwrite a Jacksons tour of South Korea with Michael. According to sources, they contacted Joseph and Katherine Jackson and members of the Jackson family. They gave them all gifts and cash, ranging from Rolex watches to luxury cars. At one point, the group’s representative went to Frank DiLeo, Michael’s manager and brought two casher’s checks for $500,000 apiece. DiLeo refused to accept the money. He said, “If Michael wants to tour South Korea, we’ll call you.”

The truth was, DiLeo and Jackson did not want to be involved with the Unification Church.

The Moonies meantime made a deal with Joseph Jackson and the ever astute Jermaine for the tour. When it didn’t materialize, they sued for their money and gifts to be returned.

In the lawsuit, the Moonies claimed they were out $5.5 million. To avoid losing their Encino home, the Jacksons transferred ownership to Michael. (That’s the short version. The long version, including the parents suing LaToya, is too hard to explain here.)

Michael Jackson settled with the Moonies in 1992. But his parents were separate defendants, as was a concert promoter named Kenneth Choi. They never showed up for trial. In 1994,  a trial judgment was filed against them totaling $4 million. In 1996, the Moonies filed to take possession of the home. That’s when they transferred it to Michael. Since then, the Moonies have just waited. And with interest, they say they’re up to $13 million.

This is interesting: according to sources, because of this judgment, neither Katherine or Joseph Jackson uses credit cards or can get credit. “Everything they do is in cash,” the source says. The judgment was reportedly part of the Jacksons’ 1999 bankruptcy filing for $24 million.

Now, of course, with Michael’s estate being the subject of so much press–and proclamations of earning so much recently–the Moonies are back to get their dough.

Really, you can’t make this stuff up.