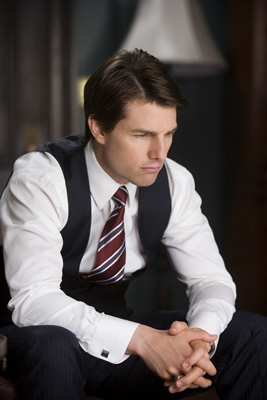 Tom Cruise is not having a good week. “Knight and Day” dropped 8.7% from Wednesday to Thursday, its second day of release. That’s the biggest single drop in top 10– and all the other movies have been out for a week or more.

Something is turning people off to “K&D” in a big way. It did only $3.4 million on Thursday, which means a long, hot weekend is beckoning.

Today brings Adam Sandler and co. in “Grown Ups.” You know it’s awful, but theaters are air conditioned, babies need to be sitted, and pop corn with a little butter is always a good snack. It’s going to push “K&D” down the list. The only bright spot may be foreign ticket sales. “K&D” was filmed so people in Spain and other non English speaking countries would get a kick out of seeing their locales on the screen. Also, incoherence isn’t an issue with subtitles. So Cruise may make some of his dough back there.

And no one will ask why the main characters are named Knight and Day!